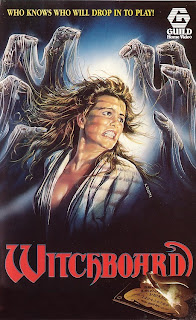 Though director Kevin S. Tenney has faded into obscurity in recent years, he did start his career in the late 80's with two solid horror efforts. The better known of his films is his second feature, the tongue-in-cheek gorefest "Night of the Demons" but his first film, the more subtle "Witchboard", very well might be the best of the two. Considering how celebrated "Night of the Demons" is it does come out as a bold statement but trust me, the solid characterizations makes this come out a hair on top for me. 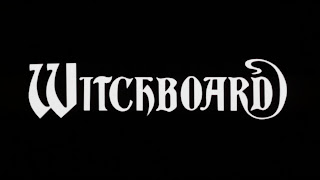 While at a party, a smarmy arrogant rich snob brings a Ouija board and with the help of the luscious Tawny Kitaen (ex-wife of Whitesnake leading man David Coverdale, and she's best known for appearing scantly clad in his music videos straddling cars and such) they conjure up the spirit of a 10-year old boy. All goes well until Kitaen gets addicted to using the board and the spirit decides to turn evil, causing all sorts of poltergeist and exorcist shenanigans. Can her skeptical boyfriend learn to work with his arch rival, the rich snob, in order to save her from being possessed?
For me, what makes "Witchboard" better than "Night of the Demons" is the characterizations and strong character arcs, which is a rarity of horror films of this nature. Many horror fans might find the first half of the film to be 'boring' as it takes time to develop characters. For this I applaud Kevin Tenney as his script truly got me involved with the characters and actually care about their outcome. The strongest part of his script has to be how our two feuding males in the love triangle learn to solve their differences in order to save a human life. The twist at the end on who they really contacted while using the witchboard was also a treat. Well done Tenney!
Tenney is also able to craft many scenes of shock, including and not limited to a scene where a guy gets crushed by selveral slabs of dry wall. It might be light on gore (something Tenney would amp up in his next film) but he makes up for it with so clever kills and chaotic climax which mixes supernatural and slasher essentials. To top it off he gives the audiences some great creative camerawork, the most memorable being a scene were our hero gets pushed out a window and a scene where he shoots the Ouija board at the camera with the camera going through the bullet hole!
It may not be as gory or over-the-top as "Night of the Demons", but the subtlety works for "Witchboard"'s advantage making it an effective low budget horror film. Sure the acting can be shaky at times, but for the most part it's good and strong characterizations makes this for a more engrossing horror film experience and definitely one of the better horror films I've seen to emerge from the late 1980's. "Witchboard" is definitely a horror film worth hunting down. Like "Night of the Demons" it did inspire two sequels: "Witchboard 2: The Devil's Doorway" and "Witchboard: The Possession", which I have yet to see mostly for the fact that the second film is not available DVD.