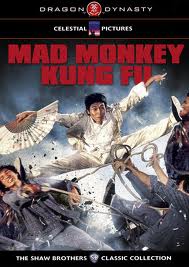 Kar Lau Leung (or however the thousand ways you want to spell it) is hit or miss with some of his movies. The idea of a kung fu film based on Monkey Fist kung fu though was more than enough to garner my attention and when Dragon Dynasty finally pulled “Mad Monkey Kung Fu” out I simply had to see it. The results of this 1979 film are mixed.

After being framed for a crime while intoxicated Master Chan, a proficient Monkey Fist kung fu performer finds himself with crippled hands and his sister indebted to a conniving businessman. He earns his living performing a street show with his pet monkey, but when a down and out young man befriends him he begins to find his courage again to stand up against injustice.

Despite the trickery of its silly title, there is actually quite the drama buried in this film. A great lead character battles alcoholism, social shame, and being crippled while he finds renewed faith in training a young wayward man with potential. It almost sounds like an ABC Family original movie when you look at it that way! The acting is well done, the characters (at least the major ones) are well built and the writing is surprisingly strong with talk about monetary injustice and finding one’s place in the world. In many ways, this one separates itself from other Shaw films by having some legit writing to build itself on.

Believe it or not considering it’s the great Kar Lau Leung behind this film both onscreen and off, one of the weaker points of the film happen to be the fight sequences. Until the final throw down where teacher and student must team together the film mostly focuses on only using the choreography and fighting to further the plot. The training sequences are clever and well executed (did I mention it’s a Kar Lau Leung film?), but the general fighting can be a little weak until the final act which is somewhat disappointing considering how fun the Monkey Fist style is.

“Mad Monkey Kung Fu” might not be what was expected initially, but its solid story and characters sold the film beyond its rather gimmicky premise. Something that only one in a handful of Shaw Bros movies can say they accomplished. It makes for a rather intriguing watch and one that should impress most kung fu fanatics.

Written By Matt Reifschneider
Posted by DarkReif at 11:17 AM