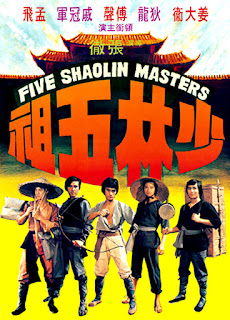 Although Executioners From Shaolin struggled to impress with its stuttered story telling but impressed certainly with its action choreography, the very similar Five Shaolin Masters improves on it in every way...and it was made three years prior. With an insanely strong cast, a great kung fu revenge plot that's surprisingly well written, a director of legendary status in Chang Cheh, and choreography by the just as legendary Lau Kar Leung - there isn't a single aspect of Five Shaolin Masters to dislike...sans some of its over the top emotional pan shots that seem to litter the film, but even that is just a small issue that arises.

After their Shaolin temple is burned to the ground and most of the martial artist experts with it, five exiled Shaolin disciples will have to ban together with local patriots to discover the traitor in their midst and deliver some much needed revenge. The five of them will have to face five equally vicious villains to succeed in helping the people against the Qing regime and only their will power and dedication to various forms of Shaolin kung fu will see them prevail.

Broken down, Five Shaolin Masters is your basic Shaw Brothers kung fu flick at heart. Five heroes versus five villains in a an attempt to avenge their fallen brothers and bring justice to the unlawful land while saving the people from an obvious tyrannical rule. Shit, that could be the synopsis for hundreds of these films and it would seem like I've seen that many with this basic concept. It's not all that original to be perfectly honest. What does set this epic kung fu masterpiece aside from say, the previously mentioned Executioners which damn near has the same plot foundations, is that it succeeds both as an entertaining over the top kung fu fight fest and as a story telling media featuring strong characters with acting to go along with it.

At times the rather gimmicky kung fu aspects can seem silly. The fact that these five shaolin masters must each perfect a form of kung fu that equally matches the various villains to defeat them is a bit out there and conveniently kung fu. Each villain has a gimmick and thusly, each of our heroes must have one too. Luckily, between the two masters of Shaw cinema, Chang Cheh and Lau Kar Leung, there seems little to roll one's eyes at even at its silliest. Our characters are strongly built with specific individual traits, portrayed by strong actors and Cheh's storytelling is some of the most cohesive I've seen since Five Deadly Venoms. It flows extremely well, building on dire need to pull together to face the common enemy, and punctuates great plot progressions with some well placed kung fu fighting.

Of which there is more than plenty. Lau Kar Leung flourishes as a choreographer here throwing in the best of what he has to offer. Epic fight scenes of hand to hand combat, some weapon fighting (including a bad ass staff vs. flying ax river fight which stuck out as stylish and effective), an all out group brawl, and of course, lots of training sequences in the end. The massive amounts of stylized kung fu, five guys vs. five guys all with different styles, leaves a very epic finale that will have kung fu fans picking their jaws up off the floor as it leaps between each battle. It's a massive amount of work in action set pieces, but its all worth watching and it effectively builds the characters and plot as it goes.

With Cheh's vision for the epic, Lau Kar Leung's knack for crafting amazing fight work, and the impressively written plot that works with its solid cast - there is a whole lot to love in Five Shaolin Masters. Occasionally it can be quite cheesy with it's long silent moments of desperation or the complex amount of secondary characters, but in the end it all works to create a dramatic and fist filled flick.
SHAWSCOPE VOLUME 1 UPDATE from ARROW VIDEO: 01/05/2022

Although my thoughts on Executioners from Shaolin may have shifted towards more positive territories since I wrote my original review on this film, my stance on Five Shaolin Masters remains the same. This is easily one of my favorite Shaw Brothers films from their long and illustrious career as a studio.

Rewatching the new Blu Ray, included in the expansive new set from Arrow Video called Shawscope Volume 1, it’s easy for me to stake that claim. It’s story of brotherhood in the wake of the burning of the Shaolin temples, a staple for director Chang Cheh at the time, is uplifted by its incredible who’s who casting from the studio and punctuated by the elongated fight choreography from Lau Kar Leung. The structure of the film remains the biggest obstacle, particularly how the film essentially spends a large portion of its entire third act bouncing between the individual fights between our titular masters and their counterpart villains, but it’s dynamic enough and heartfelt enough to carry through its oddities.


On this disc with the film there are a ton of features worth noting, but a couple of interviews with David Chiang and Ti Lung are fun and the retrospective discussion about director Chang Cheh by film historian Tony Rayns is the best. There is a ton of information provided in both that fans will definitely want to see and it adds some great context and subtext to the film.

Although Five Shaolin Masters is often overlooked for its narrative, it’s not a film to sleep on. It remains one of my personal favorites and a charming, impactful film with some fantastic performances and kung fu fight sequences. One of the highlights of this set.

Written By Matt Reifschneider
Posted by DarkReif at 12:27 AM