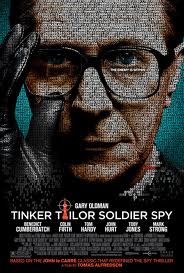 "Tinker Tailor Soldier Spy" is ripe for cult attraction. Directed by Tomas Alfredson who gave us the undeniably amazing "Let The Right One In" and starring the massively underrated Gary Oldman in the lead role, this espionage film about a Russian mole in the higher ends of British Intelligence in the 1970s contains so much talent in its confines that there isn't any possible way it could be bad...and its not. The film does happen to be quite boring though.

George Smiley (Oldman) has just been given a new assignment. After a botched attempt by his boss to uncover a supposed mole within the British Intelligence (deemed The Circus here) that gets an agent shot and apprehended on foreign soil, he was forced to retire from service along with his mentor and boss Control (Hurt). Things haven't gotten better though and Smiley is brought back in to dig deep and bring out the shadowed mole or prove it was a ruse. Like a puzzle of lies and double truths pieced by both the Brits and Russians, Smiley will have to gather enough intelligence and facts to bring to light one man who threatens it all.

Starting with the positives, "Tinker" is a beautiful film. This cannot be understated. Alfredson takes a very 70s approach to filming it focusing on long winding shots, lots of silence, and very subtle detail work to make this film is as nuanced as the clues our protagonist is sifting for. Even the rather timed look of the visuals and decadent use of costumes and sets make one feel like they are living in that time period and never does that feel awkward. This is partnered with stunning performances from Oldman and a plethora of great supporting cast members. Character actors like Mark Strong, Tom Hardy, John Hurt, Colin Firth, and a half dozen others all litter the film with detailed characters that more often than not feel completely brushed over with its over zealous plot twists and detail focused storytelling. Which is a great problem to have.

On the other side of this 'expertly executed' fence, comes the more realistic and now artistic side of film making. Did the damn thing entertain? To a certain point it did. It's execution is damn near flawless and its complex characters and script make for a film to tease out details on further watches. It also happens to be quite boring. For all the details and plot twists, rarely did the film connect with me on an entertainment level. As if one is along for the ride watching the tale unfold rather than in the mix and letting it happen around you. One is so encased with thought at its nuances that one forgets to be in the moment. A rather haunting flaw that leaves one rather uninterested with how the film eventually ends.

The one major flaw of the film is one that its script and style embraces with a passion, allowing the art of "Tinker Tailor Soldier Spy" to pour over with grandeur. This is a film that is one to sit and analyze for its great executions, but not one that I would throw on for fun...which can be a deal breaker in my book.