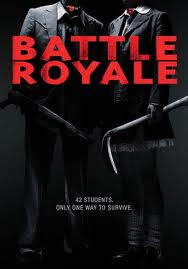 Here at Blood Brothers we like films that push boundaries. Although certainly not a bad film, "The Hunger Games" didn't push buttons like one would hope. So let's go back a decade or so and scope out "Battle Royale", the Japanese film about a society where we make kids kill one another and a film that loves to push the boundaries of cinema to the brink in all of the most intriguing and ferocious ways. A film whose intensity and brutality is only matched by its clever social commentary and superb execution.

The world is a different place. Society has failed to keep the youth of its countries in check and spreading violence and anarchy has lead everything to this: Battle Royale. A program where one class of students in Japan are taken to a remote island, given weapons, and told they have 3 days to kill each other until only one remains. If more than one remains, then they all die. Now a reluctant class of youth have been chosen and with a few willing participants to edge the game forward, they must make decisions about their lives that will change them forever. It's kill or be killed.

Ironically, the best thing about "Battle Royale" is with its relatively simple concept it covers an insane amount of ground in its writing and concepts. Everything from how adults and youth misunderstand each other's needs to suicide to love to friendships to the act of death on one's psyche. This movie touches on all of it. With its wicked fast pacing and need to take it to the next level whether it be by paranoia, terrorist ideologies, or plain and simple violence, "Battle Royale" is a film that entertains for two hours, but sticks in the brain for years with its complex characters and twisting leaps of storytelling.

Only added to this is expert finesse when handling the onscreen execution. The cast is stunningly good with particular nods to our leading students and a brief but very intense performance from legend Beat Takeshi and director Kinji Fukasaku lays the atmosphere of the island the the intensity of the situation on thick with great cinematography and classy thought provoking shots. Although the film is littered with great black humor (more often than not you're not sure whether to laugh or cry like how some of the characters are willing to kill for the most asinine things that seem important to youth), its the intensity and bursts of violence that always stick out. Watching these kids kill with whatever they have (everything is a weapon in this film) and the reasons they kill for really does stick with someone after the film is done. It's this ability to blend entertainment and depth that makes "Battle Royale" the instant classic it is today.

Really the only part that seems out of place are some of the oddly situated dream sequences. The ones between our leading girl and Beat Takeshi seem too artistic for their own good, while some of the basketball game "memories" just flat out come off as awkward. Depending on whether or not you watch the director's cut of the film or not also elongates this further and adds more to it.

The bottom line remains: "Battle Royale" is a brilliant film that combines the great aspects of cult cinema into an artistic and relevant message about humanity and our reluctance to understand what we are doing. It's got amazing execution with a ferocity to push the boundaries of what this film could be and its a film that will remain with its audience long after its finished. Blood Brothers approved!