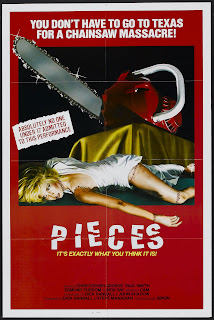 "Pieces" has the notorious reputation for being the most bloody and violent slasher from the golden age of the genre (late70s through the early 80s). I can attest to that as it is certainly the goriest and most brutal slasher I have ever seen from the era. From it's poster artwork featuring a chainsaw and a stitched together dead body to it's fitting tagline "it's exactly what you think it is", the filmmakers knew exactly the film they were trying to make and they succeed making one of my biggest guilty pleasures I own in my large DVD collection. 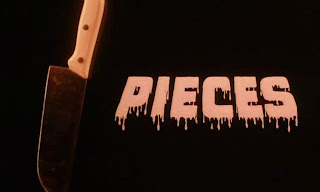 The film opens in the 1940s (though many of props say otherwise) with a boy chopping up his mother with an axe after she discovers his porno picture puzzle. Flash-forward to the 1980's and brutal killings with a chainsaw start occurring on a college campus which for some reason seem to dumbfound detective Christopher George. Red herrings are aplenty (like groundskeeper Paul "Bluto" Smith and dean Edmund Perdom) as our useless college student and undercover tennis pro try to solve the case before the killer completes his pieced together human jigsaw puzzle.
Schlock producer Dick Randall set out to make the most violent, intentionally offensive slasher ever made and he succeeded in every way imaginable. These killings are so over-the-top that they become unintentionally funny, adding to the sheer fun nature of the film. The most brutal scenes include a bathroom dismemberment and waterbed killing with a kitchen knife. Why a kitchen knife? Maybe just to switch things up a bit though it does seem a step down the ladder from a mighty chainsaw.
The plot and dialogue is a complete mess no doubt due to English not being Spanish director / screenwriter Juan Piquer Simon's first language. We get tons of unintentional laughs as characters say the most absurd things at the worst situations, like our cop wanting to know someone's opinion if a chainsaw was the murder weapon. What, you mean that large bloody chainsaw sitting next to a pile of body parts... uh... yea I'd say so!
Three other things that give me a good chuckle is that 1) the killer is shown in shadow form and with his hat he looks just like the old radio show hero, 2) the outrageous WTF ending and 3) a psychotic Chinese kung fu expert that almost kills our dull college guy playing detective. Seriously this scene comes out of fucking no where! Well there is an explanation... sort of. Producer Dick Randall traveled all over the world to make movies and one of his stops was in Hong Kong to make a number of Bruceploitation efforts including "The Clones of Bruce Lee" and in order to generate some free advertisement for his other productions, he forced the director to throw one of the Bruce Lee clones in the film. Bruceploitation and slasher films go together as good as blood, milk and sky!
"Pieces" is sleazy, degrading, but damn if it ain't entertaining! It's definitely not for all tastes but for fans of grindhouse type cinema that prefer their slashers to go-over-the-top and overflow the blood gates with gore than this is a must. A great film to get together with friends and watching them squirm and yell "oh my god!".... and that's why it's one of my all time favorite guilty pleasures!