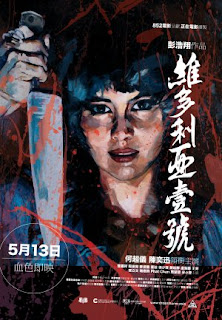 The slasher genre is one that might appeal to cult fans, but generally speaking is repetitive, silly, repetitive, simple, repetitive, and usually littered with heaps and heaps of lower than B-grade garbage films. This is the reason why when a film takes a new stab at the genre by doing something unique (pun fully intended), it tends to come as a shock. 2010's "Dream Home", not to be confused with the vastly inferior psychological horror "Dream House", is Hong Kong's answer to the still impressive "American Psycho". Full of nuance and detail, this slasher takes a run at justifying the genre with the current economic state of the world and the pressures of living in the fast paced society. It pushes limits, throws in enough dark humor to break the massive amounts of tension, and accomplishes at creating a slasher based on real estate...one that's surprisingly artistic and well executed.

Cheng Lai-sheung (Ho) has dreamed of owning her own flat since she was a little girl and their family was forced from their home by the waterfront by underhanded real estate deveolpers. She works two jobs, sacrifices her time with friends, and diligently saves for the flat of her dreams. When her bid is suddenly rejected for a higher price, despite all of her efforts, Cheng Lai-sheung must perform the drastic to keep her dream home...one that might leave a few neighbors in pieces.

A slasher based on real estate motives? My skepticism was probably as strong as yours reading that question before heading into "Dream Home". Turns out director/writer/producer Pang Ho-cheung has it all under control. With a stunningly well casted and acted lead in Ho to build it on, "Dream Home" takes a very artistic and dramatic approach to the slasher genre. It builds a massive back story through leaping time frames (the film starts off with her initial murder of the security guard for her spree before kicking back and forth) which can be confusing at times but certainly work to build some nice tension and gives our protagonist, who is the slasher killer, justification for her decent into insanity. It throws in facts and morally grey areas about how the people of Hong Kong are treated in the real estate market (and just how fucking expensive it is) to give itself some solid social commentary and its this element that really builds a very strong foundation for the film. A great character who's expertly acted and motivations that everyone can relate to give this film a leg up on the competition right from the get go.

With its great social commentaries and psychological moments for its protagonist, "Dream Home" has the right combinations to build a solid dramatic film. This is where its slasher elements rip through and shred the viewer. Great tension and a solid supporting cast give the moments of slasher violence enough punch to knock the viewer right out of their chair. Like many modern horror films and similar to what France has been doing with their extreme films, "Dream Home" is VIOLENT. AND DISTURBING. It takes its realism of characters and plot and then blows through it with a significant amount of gory and over-the-top violence while retaining many of the slasher elements needed in the genre. Clever kills? How about killing a woman with a vacuum seal bag? Nah. Not violent enough. Let's make it a pregnant woman...yeah that will make you cringe. How about a killing sequence of youth having sex? Got that...but let's lop off a few sensitive areas while doing so. The cliche cops that come to the door? Yep, that's included. I won't even go to how "Dream Home" makes that violent and unique. It's as if Pang Ho-cheung was an expert about slasher history and decided to throw in a dramatic character study in the middle and it works like magic.

"Dream Home" is one of the best slashers in the last ten years. It's got all the elements of a great entertaining slasher, but its unique artistic look and twist on it builds a legitimately solid film that sucks the viewer in before thrusting the violence right back at them. If you are looking for a great gory and disturbing horror film that adds enough story and character to make up for a couple dozen other B-grade slashers then look no further than "Dream Home". An instant cult classic.

Written By Matt Reifschneider
Posted by DarkReif at 4:04 PM