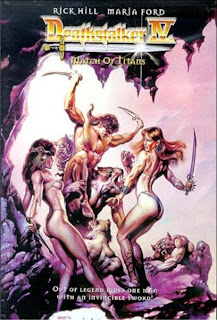 "I could be so much more fun to you alive than dead, if you'd just untie these straps" - Deathstalker

After suffering through "Deathstalker III" with its non-entertainment value and the schmuck they turned the title character into, the one thing I wanted most in the world (of B-movies that is) was for the original Deathsatlker Rick Hill to return and portray the character he helped created in the lovable original B-movie romp. The B-movie gods must have listened as "Deathstalker IV: Match of Titans" showed the return of Hill in the title role. Holy fucking shit, that means this is the going to be the best "Deathstalker" sequel ever... right? Who would have guess that the overall product would be even worse than that sequel that calls itself "Deathstalker III: The Warriors from Hell".

The plot is essentially a tack-off of the original film (which rip-offed "Enter the Dragon") with an evil sorceress (a women this time!) holding a tournament for all the best fighters in the nation to attend. Of course Deathstalker must oblige to uphold his selfish duty of being the best fighter in the land. The sorceress has her own plans and uses the tournament as a means to kill all the fighters, turning them into stone warriors to do her own bidding.
The best part of this dismal, tired sequel is the return of Rick Hill as this guy embodies what Deathstalker should look and sound like. First of all, he looks like a barbarian, ala Conan, and not some frail Robin Hood figure like the guy in the last film. Hill knows what it takes to make a somewhat interesting anti-hero character in barbarian times. Hell the writers even throw in another likeable sidekick, played by Brett Baxter Clark whom B-movie lovers might recognize from all those bad Filipino shot Vietnam flicks from the late 80s (see my reviews for "Eye of the Eagle", "Delta Force Commando" and "Cobra Mission 2" to see more of his impressive filmography).
The rest of the film is bottom of the barrel material. Not only is the plot is stolen from the first film, it is also padded with plenty of stock footage from that very film in order to make a standard running time. Despite the filmmakers attempt to change things around by making the villain a women, they fail by making her a completely forgettable character that is far too easily killed off. The love interest is bland and the production values are as low as they come (with the paint on the stone soldiers being the absolute worst). Also, what the hell is up with the lion headed warriors? Laughable beyond belief.
I was praying for some good B-movie material here especially with the return of Rick Hill in the title role, but sadly what we get is a washed up sequel that proves the silly sword and sorcery franchise has gone on for too long. I hate to say it but "Deathstalker IV" is the worst entry in this brainless franchise, which is saying a lot considering how bad part III was. Stick with the first two films... at least those are entertaining, even if it's in the bad movie vain.

Written by Eric Reifschneider
Posted by Cronosmantas at 1:40 PM