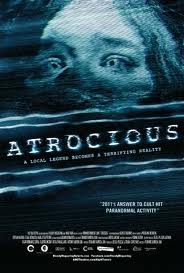 As if there isn't enough "found footage" horror films out there, Bloody Disgusting decided to tempt me with the Spanish film "Atrocious". Being the curious fellow that I am and with the well crafted "[Rec]" still kicking my ass to this day, I decided to bite. And I bit into a little atrocious film here. Unfortunately, its not 'atrocious' in the good way. The cliche' aspects of the film handedly bog the experience of our haunted woods story with boring characters, lots of jiggling of cameras, and not enough pay off with its ending 'twist'. Leaving a film that seemingly rides on the coat tails of far superior films like "Paranormal Activity" and the surprisingly solid "The Last Exorcism".

A brother and sister are off to spend a fun Easter with their family on a dilapidated family house on the edge of the woods. They decide to bring with them two cameras to film the woody labyrinth around the estate to capture the ghostly girl Melinda to prove her existence. Although the boring house leaves not much to be desired for filming, the two get their kicks out of trying to capture the girl in the labyrinth. When things start to go bump in the night and suddenly their dog goes missing, our two siblings might find out more than they want about the secrets of their little family vacation.

One thing that director Luna does well on "Atrocious" is that he builds some nice atmosphere. The house is admirably creepy and the thicket of foliage outside is damn dense to add to the isolating feel of the film. What doesn't happen to make all of this effort worth it is the payoff. Our characters are oddly detached from the audience with actors who do their best with what they have and, being honest here, nothing happens in the movie. We get one missing dog before the climax of the film. A few odd noises. Nothing that's worth your investment until the crescendo of the film. It just drags on and on and on.

This should be offset by the massive build to the finale. Luna works his ass off trying to sell this major twist to the obviously formulaic ghost plot and all that happens is that it comes off as completely out of left field. We get a whole lot of running around in the labyrinth with night vision cameras (it was like an entire third of the film that was spent looking at bouncing tree branches), a few awkward finds for our siblings including some oddly placed almost 'ritualistic' set-ups to scare the audience, and then the twist which is not at all set up well. In fact, the motives and reasons for the events of "Atrocious" seem to leap from out of nowhere and take the audience by surprise...then leaving them confused for the rest of the play time. It was quite frustrating honestly.

Not that I have a whole lot of faith in the 'found footage' style horror films, but my hopes were somewhat heightened for "Atrocious". Hopes that were only crushed by its rather mundane writing and poor payoffs of what might seem like clever twists. Further proof that 'found footage' horror films only work if the gimmick does for which it doesn't on "Atrocious".