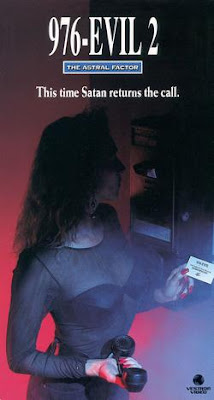 There was hardly enough material in the routine 'nerd gets revenge' horror flick "976-Evil" to warrant a sequel but low and behold one did arrive a few years after the fact, directed by none-other than go-to-sequel director Jim Wynorski. His name alone can give mixed emotions, ensuring the sequel will be so bad it's good (as with "Deathstalker II: Duel of the Titans") or so bad it's just fucking bad ("Ghoulies IV"). Sadly this sequel dials in closer to the "Ghoulies IV" end of the Wynorski spectrum.

In this loosely connected sequel, a college Dean starts to take a demonic turn after dialing the notorious 'horrorscope' hotline. He uses his demonic powers to kill beautiful college girls and to astral project his body out of his jail cell to kill his enemies. In comes Patrick O'Bryan, whom you might remember from the first film but probably not (he was the biker cousin that saved the day). Can he protect the gorgeous daughter of the head of the police department before the Dean takes her straight to hell?

The whole production has Wynorski's trademark themes, including a large focus on scantly clad female flesh as opposed to plot. This would all be fine and dandy if he decided to take the film more into a light hearted comic approach but surprisingly he opts for seriousness, but there's still so much dumb shit going on to truly take this kitchen sink sequel seriously.

The dumbshit things that annoy me about this sequel include, but aren't limited to, a fridge throwing killer frozen dinners, an exploding toilet, a flying AK-47, a cheap 'evil' sounding phone ring tone and a main theme that's a bastardized creation of mixing the theme of "Total Recall" with western twang guitar. Our main beauty is even quick to trust a crusty biker about a supernatural phone line. I hit my head on more than one occasion from the lame shit going on in front of my face.

The overall look of the film is extremely cheap, as to be expected by a direct-to-video sequel directed by Jim Wyrnorski. The acting is also second rate as if the cast doesn't know what approach the director wants to take with the subject - tongue-in-cheek or serious. We do get Brigitte Nielsen in a throw-away role as an occult bookstore owner.

The only aspect I can praise this sequel for is impressive gore effects (including a body getting splattered by a semi) but overall this is a completely pointless follow-up to a film that was undeserving of a sequel. Wynorski seems lost on what approach he wants to take this entry in and the overall effect just another horror sequel to clutter up video store shelves.

Posted by Cronosmantas at 7:39 PM