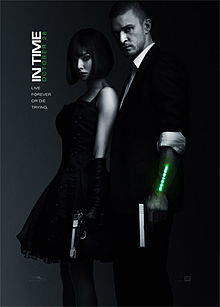 If there was a belief that I hold for modern science fiction films, its that there rarely are ones that are mediocre. They are either amazing or suck royal hell. Despite my excitement for the intriguing and seemingly Philip K. Dick inspired plot of "In Time", this film falls into the latter. It's got a great concept and some great moments, but this watered down and plot hole riddled science fiction thriller never seems to get it cohesive and it fails to obtain the impact it could have had.

In the not to distant future, the world has now replaced currency of bills and coins with time. Time is either added or subtracted from an individuals clock (which is read by green numbers on the forearm) for purchases and debts. Enter a young man Will (Timberlake) whose life in the ghetto has him living day to day and not necessarily by his own choice. When he suddenly finds himself with hundreds of years added to his life for a good deed, he decides he needs to use it for the best and give the people of his home the time they desperately need. In the process, he just might need to become the villain of a corrupt system to prove his point.

I love the idea for this movie. Let's talk about western society's weird obsession with time. Let's talk about inequality between classes. Let's talk about the inaccurate distribution of wealth (in this case, time) between individuals and let's do it with enough science fiction snazz and thriller action set pieces to make it entertaining without losing the commentary. Here's the problem: Andrew Niccol's script and directing abilities can't get done properly. The concept is there. The execution is not.

Right away, the film's obviously leaning towards the mainstream audience waters the entire thing down. Timberlake is fine as the lead, but nothing special. As is, none of the cast is. Even the normally captivating and subtle Cillian Murphy is wasted on a poorly built Timekeeper (cop) that is after our anti-hero lead. It's frustrating to watch as the film takes this great concept, brushes over its themes, throws in some half thought through villains, riddles itself with illogical plot holes, and then ends up being a Bonnie and Clyde knock off film. Hold on, the damn thing on paper certainly looked impressive...where did it all go?

The whole film succumbs to poorly expressed options. You know that feeling when you want to say this brilliant comment that will have everyone laugh for ten seconds and think for ten minutes, but when you go to say it all that comes out is 'ummmm...yeah'? That's what "In Time" is. It's this great thought, ill expressed and hindered by its mainstream catering and rushed writing where all of its elements come out jumbled. It's casting is shoddy with actors desperate to latch onto something solid for their characters, its story jumbled and unfocused, and its visual execution void of deeper impact. "In Time" could have been the next great science fiction film...but as is, it's another film one finds in the $5 bin at the local Walmart to be scavanged by those looking to just kill time.