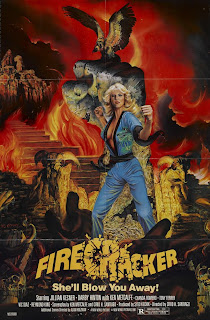 As expected the plot comes secondary and is basically a complete copy of Santiago's early Blaxploitation martial arts film "TNT Jackson", substituting the black lead with a white woman and moving the films location to the Philippines. I wouldn't doubt if Santiago ripped off the title sheet to the "TNT Jackson" script and replaced it with one that read "Firecracker", that's how much the plot of these films is alike! Here we have a sexy martial artist arriving in the Philippines to find her missing sister (instead of brother in "TNT"). She tries to work her way into a drug ring and ends up working with some undercover DEA agents (again, just like "TNT").

The absolute best part of this cheap martial arts thriller is Jillian Kesner as our sexy and deadly lead actress. Unlike the lead in "TNT Jackson" who had no martial arts abilities and was hired solely for her 'assets', Kesner not only has the looks but is an accomplished martial artist as well. Due to this she holds her own in plenty of violent fight scenes. I shit you not it's about ten in total with the first occurring in the first 2 minutes!

Schlock director Cirio H. Santiago knows exactly the type of film he's making so he pulls no punches in showing off Kesner's beautiful body. In her first fight scene, she fights some guys that busted into her hotel room only clad in panties and a bra. One long fight sequence has her loose her dress (yes, that is unintentionally funny) and ends up fighting her enemies topless! Silly and exploitative? Yes. Memorable? YOU BET!

Cirio also peppers the film with some gory scenes, including a night watchman getting impaled by a tool and even some eye gouging. Scenes of gratuitous violence are always nice addition to spice up a B-movie. The choreography is also decent here making the fight scenes far more believable than those so-called fights in "TNT Jackson".

"Firecracker" is bad but enjoyably so. The acting, editing and overall plot flow is laugh inducing but the fight scenes and sexy heroine makes this oh so entertaining. A definite guilty pleasure of mine and hands down my favorite schlock film from cult director Cirio H. Santiago. It's just a damn shame Kesner didn't go on to do more films of this nature. "Firecracker" got it's long awaited DVD release from Shout! Factory in a triple feature titled "Lethal Ladies" packaged alongside partner in crime "TNT Jackson" and "Too Hot to Handle". This set is worth checking out for fans of trash cinema.