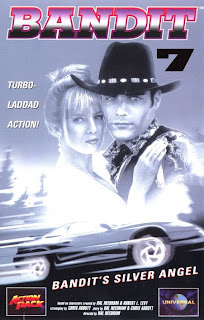 I finally did it! I finally plowed through all four lame made-for-TV "Smokey and the Bandit" sequels without blowing my brains out! That is a true feat my friend and it's amazing the crap one can fly through when stuck at home healing from a surgery, like I have with my jaw for the last couple of weeks.

Well this time Bandit (Brian Bloom, his fourth time around) makes friends with, get this, carnies! Well his carnival owner uncle passes away and some greedy jackasses want to take his carnival and profits. Well Bandit, thinking with his small head, decides to help the new beautiful Carnival owner (played by Traci Lords) by sneaking the carnival semis through treacherous back roads to get out of the county.

The filmmakers decide to spicy up the cast by casting controversial ex-porn actress Traci Lords but she further proves how worthless of an actress she is in roles that don't involve nudity and sexy outfits. Traci Lords as a.... carney? No thanks!

The plot, just like all the other made-for-TV sequels, just doesn't have enough material to pad it out to full length and I fell asleep once during it's running time. Sure the pain meds had a hand in it but boy was this painful at moments.

Universal Pictures experimental "action block" flopped for "Smokey and the Bandit" franchise as these four made-for-TV sequels failed to generate enough interest from viewers for it to 'bloom' into a syndicated television series, with Brian Bloom and his blue eyes fading into oblivion. These lame films also feel into oblivion only having VHS releases overseas until a DVD set entitled "Smokey and the Bandit: The 7-Movie Outlaw Collection" included all three theatrical and four TV-made films together in one set for the first time. I can only recommend these movies to the most curious film goers, like myself, as these four TV-made films are better off left undiscovered in my humble opinion.

Written By Eric Reifschneider
Posted by Cronosmantas at 8:38 PM