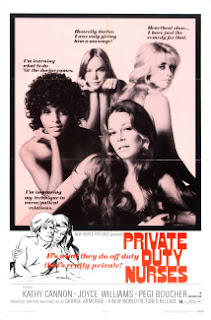 
With "The Student Nurses" being a hit, Roger Corman with his new company New World Pictures decided to make a follow-up with "Private Duty Nurses", the second of what would become a five film series (followed by "Night Call Nurses", "The Young Nurses" and "Candy Stripe Nurses"). Though I haven't seen previous film "The Student Nurses" in order to make a proper comparison, all the films in the series have no continuity between one another other than fact they all revolve the subject of exploiting sexy nurses so one can watch each film without worrying about being lost by not seeing the film before. With that said this second film comes off perhaps being the cheapest looking of the whole series I have seen thus far and one of the of the more dull entries as it focuses more on lame 'drama' and less on having our sexy nurses go for broke in the exploitation department. 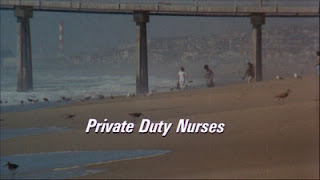 Like the formula Corman liked to follow after being inspired with "Valley of the Dolls", "Private Duty Nurses" focuses on three separate nurses (a Caucasian brunette, a Caucasian blonde and the token black chick) and how their lives intertwine. We begin with our three nurses looking for an apartment while dodging advances of a sleazy landlord. They end up at a bar where one nurse goes home with the landlord and is amazed by his high tech waterbed, a luxury back in the day this was, and then gets tangles up in a drug cartel. Another nurse while back on duty starts falling for a Vietnam vet who risks his life racing motorcycles where our token black chick becomes sexually involved with a black doctor in the ghetto who tells her about racism in the hospital she works at.
The film tries to include underlying politically motivated subplots and female liberation into the main plot structure but don't be fooled as this is nothing more than an excuse to play off the fantasies of having sexy nurses undress. With that said director George Armitage takes the material far too seriously and instead of having fun with the sexy nurse theme, he bogs the film down with all the uninteresting melodrama padded with unnecessary montages to rock music to get the film to feature length.
I'm afraid to say "Private Duty Nurses" is not that enjoyable of an exploitation film. Armitage takes the material far too seriously and the humor he arbitrarily throws in get lost in the sea of poorly handled scenes of melodrama. Will our Vietnam Vet survive his surgery? Will our brunette nurse finally find love admist being tied up in drug trafficing? Will our token black chick bring racism to light? Will the audience care? Well I sure as hell didn't and I'll bet but a majority of the audience watching this film won't either. If you looking for a nurse themed exploitation film with some entertainment value... look at one of the other entries into the Nurse Pentalogy. They are definitely more enjoyable than this heavy-handed cluster fuck.

Written By Eric Reifschneider
Posted by Cronosmantas at 8:53 PM