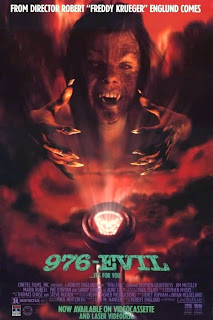 The horror community was ecstatic back in 1988 when news that actor Robert Englund, Freddy Krueger himself, was going to make his directorial debut with a demonic little film entitled "976-Evil." Upon release it received only lukewarm opinions amongst fans. Looking back on the film today even I have a very lukewarm regards to this picture... not saying it's bad as there is still some fun horror elements to be had yet at the same time it's amazing how mediocre and downright routine it turned out considering the tremendous hype surrounding the picture.

The title refers to a horoscope, excuse me, horrorscope, hotline in which a nerdy high school student (Stephen Geoffreys) calls to gain demonic powers in order to extract revenge on his enemies. Can his tough, rebellious cousin (Patrick O'Bryan), his teacher and a reporter save the town before he takes it straight to hell?

The plot is typical "nerd gets revenge" tripe that is overdone in the horror genre. Been there hundreds of times before and much better. The writing is also haphazardly done as it seems confused on who it wants the protagonist to be throughout it's slow burning plot. First it's the tough cousin, then towards the end it flips as almost out of the blue our nerd's teacher shows up with a reporter. None of these characters are fleshed out and I could have cared less about any of the characters the film tries to pass off as it's protagonist.

Robert Englund's approach to the film is very much inspired by his experiences of playing Freddy Krueger in the "Nightmare on Elm Street" series. Everything from the look, lighting and special effects laden ending looks like it lifted straight from an "Elm Street" picture. Though not all the "Elm Street" pictures were good, one has to admit they all had an interesting look about them so Englund does succeed at giving the film visual flare.

In the cast the eccentric Stephen Geoffrey's stands out. Geoffreys gained some notoriety in the horror crowd with his portrayal of a character named Evil in the 1985 hit "Fright Night" and he steals the show making "976-Evil" more enjoyable then the final results should be. Cult actor Robert Picardo however is wasted as a character named Mark Dark, the brainchild of the "Horrorscope" hot line but nothing is ever revealed about his character or his demonic intentions.

I was tremendously underwhelmed by "976-Evil" , as it only strives enough to be a routine affair in the horror genre with just the right amount gore and violence to make it worth watching. Overall I felt it was an ego trip for Robert Englund, no doubt being at the height of his popularity and wanting to prove he had what it took to be a director. Well he must have gotten the "directing bug" out of his system as "976-Evil" would be his only directing gig to this day. Despite its methodical plot and final result, the film did inspire a sequel that would arrive a couple years later.

Written By Eric Reifschneider
Posted by Cronosmantas at 1:13 PM