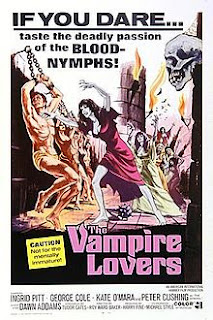 
"The Vampire Lovers" marked a significant change going on in the mighty hammer horror factory in England. By 1970 horror films began to change, especially on the European front thanks in part to Paul Nashy and Jess Franco, and nudity became a key ingredient as horror films became more exploitative. Hammer followed suit of the competition by injecting skin and other exploitative elements into their pictures. Some view this as the downfall of the studio, while others find it to be the most interesting era of the company. For me, I'm torn, but there's no denying that "The Vampire Lovers" ended up being an entertaining exploitative romp from Hammer.

The plot is the first of a trilogy of films to revolve around the vampire Karnstein family (followed by "Lust for a Vampire" and "Twins of Evil"). One of the few surviving members (is 'surviving' the right term as clearly she's an undead bloodsucking freak) named Carmilla (Ingrid Pitt) starts to invade wealthy estate owners mansions by coercion and slowly starts to feed upon their nimble daughters.

The new exploitative elements, though tame by today's standards, were shocking back in 1970. This includes a sultry love scene between two lovely women and vampire bites, get this, on busty bosoms! Of course this was all heavily censored for the original U.S. theatrical release but thankfully has been restored on recent DVD releases.

The plot, based on novella Carmilla by Sheridan Le Fanu, is a slow burner, typical of Hammer horror pictures, but it's got just enough beheadings, sexy characters and bosoms to keep one's attention throughout. Veteran Hammer director Roy Ward Baker knows how to make an engrossing gothic Vampire chiller and he does just that and handles the new addition of exploitative elements with a sure hand.

New to the hammer family is Ingrid Pitt, a voluptuous Polish actress that has a figure to die for. She has a mesmerizing presence, being able to convey both evil and sexy at the same time with her husky voice. Not surprisingly she earned a cult following after this picture and it's a damn shame she only did a few Hammer films, and sadly she didn't return for the sequels. Hammer regular Peter Cushing also shows up as General von Spielsdorf but it's a very standard role for the loveable actor and nothing we haven't seen from him before.

Overall I liked "The Vampire Lovers" as the new approach with exploitative elements works thanks to being handled professionally by director Roy Ward Baker. For this I would much rather watch this than the works of exploitation extraordinaire Jess Franco as this has a sense of professionalism and looks great to boot. The new approach worked and "The Vampire Lovers" was a hit proving skin was the key and Hammer would include this ingredient in many of their films to come, not to mention the two sequels.

Written By Eric Reifschneider
Posted by Cronosmantas at 9:45 AM