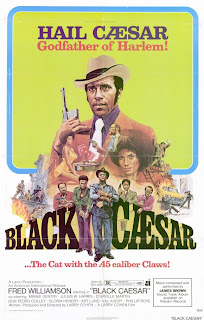 The Blaxploitation subgenre is a vast field of all sorts of varying styles. Some are made to be taken seriously, some made to be laughed at and others just made to have dumb fun. For this I love the genre as it is just a great amalgamation of different styles depending on the mindset of the directors and stars. Out of this genre, one film is mightier than the rest and "Black Caesar " is its name and in my house Caesar sits high in his thrown of gold  even above such popular genre namesakes as "Shaft"  and "Cleopatra Jones". 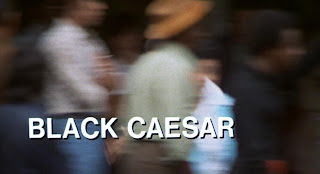 The film opens in the 1950's with a poor black boy doing money collecting for a corrupt cop. Blamed for stealing, the cop severely beats the boy and that sets forward the boys goal of eventually running the Harlem underground. Years later in 1972, the boy has grown into the intimidating Fred Williamson, and with his iron fist takes control of the city by stealing valuable ledgers containing names of corrupt predominate figures in the city. This of course pisses a lot of powerful individuals off and it's not long before William's life is under the gun.
I've always been a fan of Fred Williamson but he usually plays the same, arrogant but loveable cornball black figure. Director Larry Cohen actually coaxes a great performance out of the ex-pro football player making the actor go down dark territories that he would never go again. Williamson is able to emote an array of emotions, from fear, to anger, to love... something I never thought the actor could ever do! It's a shame that Williamson wouldn't revisit more complex characters as this in future outings in the genre.
Cohen's direction and writing and tops making this a Blaxploitation film to be reckoned with. The villains are downright evil and Williamson's character is both engrossing and engaging. The audience gets sucked into his world to see how deep in the rabbit hole he will go and if will emerge alive. Cohen's dark style pulls no punches when it comes to violence, including a powerful scene where Williamson beats a corrupt cop to death with a shine-box after the cop uses it to humiliate Williamson. Great stuff!
Black Caesar is a character you don't fuck will as he will hunt down, bullet wound and all, to kill any traitoring mother fucker. The engaging character mixed with Williamson's powerful performance and Cohen's dark writing and gritty directing makes this the best Blaxploitation film I've ever seen. James Brown's funky soundtrack only makes it that more great! Hell there are many scenes that would influence later crime classics such as "Scarface" and "Goodfellas" so crime fans shouldn't write off "Black Caesar" as 'just another Blaxploitation film'. The film of course was a success and was quickly followed by a sequel, "Hell Up in Harlem".

Written By Eric Reifschneider
Posted by Cronosmantas at 9:51 AM