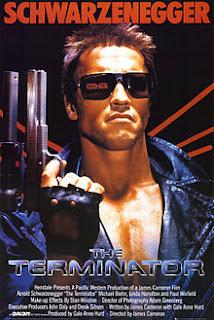 Sometimes the problem with loving cult cinema comes in the form of what makes cult cinema so great - the die hard fans. The fact that this early 80s robot carnage flick garnered such success makes it seem more like a mainstream film then the true science fiction/action cult film it is at heart. It's success, luckily, doesn't affect how the film comes across and "The Terminator" still remains one of the best science fiction and action films made to this day. With a great cast, great story, and tons of that grimy 80s charm "The Terminator" easily overcomes its flaws to be the aesthetically awesome film it's now considered. A personal favorite here at Blood Brothers too.

Sarah Connor (Hamilton) is your average young woman. Works hard as a waitress in the city. Earns enough to get by having fun being single while living the simple life with her roommate. Her life is capsized when she finds herself on the run from a cybernetic assassin from the future called a Terminator (Schwarzenegger) whose intent is to kill the mother of a future human leader that will defy the machine uprising. Her only help will come in the form of a resistance soldier Reese (Biehn) sent back in time to save her from certain execution.

Despite the relatively low budget of "The Terminator", this blast of a film sparks with a chemistry that many films can never achieve. The cast clicks. The story flows evenly and dramatically. The special effects astound for 1984. This movie simply kicks ass all the way around the merry-go-round. James Cameron, still fresh with ideas and an eye for the epic, delves deep into a rather B-grade concept and comes out with treasure. The minute details of the plot that builds on this fear of being an outsider and facing an unbeatable destiny match up with the robot carnage of watching things explode, body counts rise, and Ahhnold stomping around stone faced while our heroes desperately reach to find a way to survive it all. It's oddly in depth with its great characters (Biehn steals this movie as a love and war torn soldier doing his best in a world he has never known) and its effective pacing only helps let this tale of high octane science fiction grab the viewer by personal parts.

The grittiness of the film's style and pure 80s look only adds to the intensity of its premise. The constant darkness of the film (there is only a handful of scenes in the daytime) adds to its underlying post-apocalyptic elements and gives "The Terminator" a great atmosphere. This is perhaps the one part of this film that many seem to overlook - the aesthetic of its style is pure 80s cult if there ever was any. The violent sequences are intense (the dance room double draw of when the Terminator first finds Sarah is still one of the most underrated sequences in film) and the tension thick. It simply makes for a dense and charming watch.

Although most people love "The Terminator", it takes a special something to be an underground cult film and find the financial success that this film did. It crosses boundaries with its smart script and great characters. This single handedly makes it a must watch for science fiction and action films. Definitely Blood Brother approved!!

Written By Matt Reifschneider
Posted by DarkReif at 10:02 PM