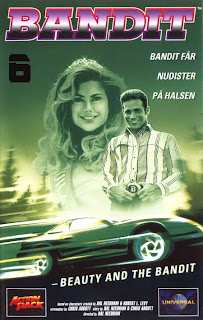 This is the third TV made "Smokey and the Bandit" sequel (the sixth overall entry into the series) and the screenwriters are already running out of ideas and this time Bandit is on his way to host a NASCAR race in Daytona. Now that's redneck heaven! So it's safe to assume Bandit is going to say "... and they're taking a left turn, oh wait, they're taking another left turn... hold on folks, another left turn!"

Ok, ok there's a little more to the plot than "...left turn" but not by much. A beautiful model (Kathy Ireland) steals Bandit's car to escape her mob boyfriend (Tony Curtis on call to collect his paycheck). Bandit then takes a charter bus full of nudists (don't ask) to get his car back but it's not that simple as the FBI, a bounty hunter and the mob are on his tail to get the girl.

Plan on learning to like Bandit driving a Bus as that's what he does for a majority of this sequel. Because when I think of a "Smokey and the Bandit" film, I think of the Bandit driving a Charter Bus below the legal speed limit... sheesh. Sure there's a little action but it didn't detour me from wanting to know will Bandit make it to his Daytona race on time! I NEED TO KNOW DAMNIT!

The filmmakers also ditch the "Snowman" character real quick this time around by having him waiting impatiently at the race. The writers also ditch the "Smokey" character from the previous film to focus on FBI characters on the hunt for Bandit but these characters are completely wasted and are only used as filler to pad this 40 minute plot device out to an hour and a half.

If you liked the previous two made-for-TV "Smokey and the Bandit" sequels then knock yourself out as there is more of the same with this entry. Typical it's overlong with not enough plot to keep you awake to get to the end. At least they got some great eye-candy with Kathy Ireland making up for the lack of sugar sweets in the last film "Bandit 5: Bandit, Bandit".

Written By Eric Reifschneider
Posted by Cronosmantas at 2:13 PM