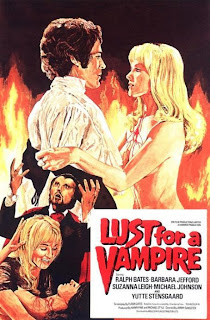 LUST FOR A VAMPIRE

"The Vampire Lovers" was a huge box office hit thanks to Hammer successfully fusing exploitation elements into their gothic horror stencil with female nudity and lesbian elements. Every huge success deserves a sequel so "Lust for a Vampire" was quickly put into production and marked the second entry into what would become known as the Karnstein trilogy. Typical with quickly made sequels lots of flaws rear their ugly head out the abrupt production time.

Taking place 40 years after the events of "The Vampire Lovers", our lovely Carmilla Karnstein (know played by Yutte Stensgaard) gets reincarnated by virgin sacrifice performed by her two family members seen in the previous film. She soon is back to her evil deeds, infiltrating a all girl school nearby seducing fellow students when they are not exorcising in flowing white robes while at the same time falling in love with the Literature professor.

The all-girl school plot element is unintentionally campy to say the least. They seriously set up an all-girl school only a short hike away from the notorious Karnstein castle, a place known for deaths of beautiful young women for centuries? BAD IDEA! The setting just comes off as crass and just to serve as an easy element to get some lesbian action into the story... but fans might be disappointed as there isn't as much as "The Vampire Lovers".

Swedish bombshell Yutte Stensgaard takes over the titillating role from Ingrid Pitt, whom turned down the film for reasons unknown (was she doing anything else of importance at the time... I mean really?). Yutte Stensgaard does lack some of the screen presence that Pitt emitted but damn is she easy on the eyes! Up-and-coming Hammer star Ralph Bates also has a rather throw-away role as a history professor obsessed with the history and evil of the Karnstein family.

Director Jimmy Sangster, a longtime screenwriter for Hammer penning many of their most memorable films, makes second directing effort and was hired in a on the fly when original director Terence Fischer had to bow out due to broken leg. Due to that production problem he still manages to craft the same loveable gothic atmosphere that fans of Hammer expect, yet sadly isn't able to get past the scripts flaws which causes the film to fall into campy territory at many moments.

"Lust for a Vampire" has an odious prominence amongst many Hammer fans but it's not near as bad as it's reputation. Sure it has flaws with its script but it Jimmy Sangster is still able to give the film the loveable gothic feel we fans expect. Plus it has the sexy Yutte Stengaard which can always make a film seem better than it is! Though not near as successful as "The Vampire Lovers", a third Karnstein film entitled "Twins of Evil" emerged the same year with better results.