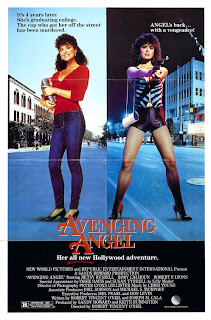 With "Angel" being the sleeper it was in 1984, New World Pictures quickly put this sequel into production employing  the same director, writer and a majority of the same cast. One key actress is absent  however with Donna Wilkes passing on the film leaving the title character to be played by the beautiful, yet completely different looking Betsy Russell.  Does she have the assets to make this sequel the loveable campy hit the original was? Let's just say it's hit and miss... a majority being miss. 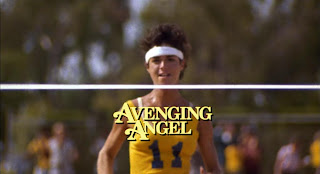 Angel, now graduating law school, has cleaned herself up and living the good life. When she gets news that the cop that got her off the streets is murdered, she sluts up again to beat the streets with the aid of her quirky friends to take down the criminal operation that killed him.
Director Robert Vincent O'Neill decides, unwisely in my opinion, to make this sequel even sillier and campier than the first film. He takes the sense of realism and drop kicks it to outer space as the humor and misfit characters are even more cartoonish than they were in the first film. These eccentric characters (Rory Calhoun, Susan Tyrrell and Steven M. Porter) instead of being loveable, tend to grad the nerves and grow tiresome very quickly. Bettsy Russell also seems uncomfortable in the role of "Angel" never making the character her own or as empathetic as Donna Wilkes' portrayal in the original.
O'Neill also adds some 'new friends' into the mix, but these guys are hardly as memorable. First up is a pair of transvestites that the audience barely gets to know and the second is some guy called Johnny Glitter, an annoying shit bag that continuously throws glitter over everyone that is accompanied by a ridiculous wind chime sound effect on the soundtrack. I seriously wanted  to reach through my television to strangle his douche bag!
I did enjoy the reprehensible villains who are uber violent in their goal to steal property and the return of the wonderful Hollywood Blvd. locations but I didn't dig O'Neill's overexaggerated approach to the film. The sillier, more cartoonish approach makes the B-level campy charm of the original absent and in its place is annoyance. I still enjoyed it for what it was but typical with sequels I didn't like near as much as the original film. "Avenging Angel" still made enough money to warrant two more sequels.