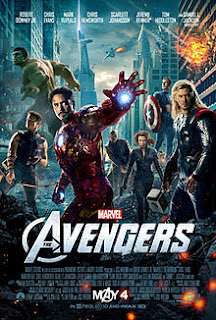 The saying 'too many cooks in the kitchen' is regularly true. Immense talent all pooled together into one film tends to make for a mediocre experience (here's looking at you "Ocean's Eleven" remake) as a film struggles to balance it all while still keeping focus and drive. This was the main fear for this "Avengers" film, not to be confused with the incoherent 1998 Americanized Brit spy film, as it weaves together the massive talents of the Marvel Cinematic Universe into one epic film. Fret not, nerds and action connoisseurs, as Marvel's "The Avengers" is in the very capable hands of Joss Whedon and the end result is a spectacular film fueled by insanely strong characters, writing, and action set pieces.

When S.H.I.E.L.D. and the ever watchful Nick Fury (Jackson) - pun intended - lose an alien energy force known as the Tesseract, last seen in "Captain America", to the conniving Loki, last scene hurling through space in "Thor", the desperation of the organization reaches an all time high. The powerful Loki looks to unleash an army from another world onto Earth. In an attempt to thwart the impending doom of the world, Fury gathers the greatest individuals together for battle. Iron Man (Downey, Jr.), Bruce Banner/Hulk (Ruffalo), Captain America (Evans), Thor (Hemsworth), Black Widow (Johansson), and Hawkeye (Renner) are gathered to create an ultimate force...but can they put aside their egos and attitudes before it's too late?

Hate me if you will, but my skepticism for "The Avengers" actually working was deep. Each of these characters were strong enough to hold their own films (some with sequels already and others with sequels in development), so could Whedon actually divvy up the screen time to make everyone happy without losing the overall scheme? Not only did writer/director Whedon pull this off, but he did it with style and punch to spare. With visually killer shots of epic proportions, some of the best action/CGI work yet, and charisma out the ass - "The Avengers" might be the best Marvel film yet.

The amazing cast is back and doing their best. As easy as it would be to assume, Downey, Jr. once again steals most of his scenes as the arrogant and cynical Stark/Iron Man, but the assembly of actors never really seems to try to out do one another. Just like how these heroes must overcome their egos in the film, throwing together the talent in this film seems to work out its kinks. Whedon's strong dialog in the first half of the film easily eclipses its very character and plot heavy script (although if you haven't seen the entries leading up to this - do so immediately as it heavily pulls details for all of the Marvel Cinematic Universe films) and really builds up how the latter half will play out. The time is separated nicely between all the characters and smoothly transitions between individual stories into the main plot and never does one feel like one character get's more time than the rest. Even our resident villain Loki rarely seems to lack screen time and his sneering and sinister identity makes for a great baddie even on the second time around.

With the strong writing and character work of the first half, comes the second half where it all explodes. It's as if Whedon felt the need to match his writing abilities with his visual ones. After all this character work and set up, he doesn't let us down. The attack and subsequent destruction of a flying invisible aircraft carrier (that really doesn't need as much explanation as one would assume) just wasn't enough, so it briefly breaks before going into an all out invasion of Manhattan by flying mechanical reptiles. Shit hits the fan and watching our heroes battle it out in the air, on the ground, in giant flying robot snakes, on the sides of buildings, through buildings, and more is like an action fan's dream come true. Explosions, baddies flying around, cars flying around, Iron Man flying around, Thor flying around, Hulk bouncing around...its damn ridiculous. IN ALL THE GOOD WAYS.

Although I'm not sure how the following individual sequels for these heroes are ever going to top this, "The Avengers" is a spectacle not to be missed. It occasionally feels like it doesn't explain enough to its details, but the great characters, banter, and action more than make up for the few minute flaws it has. This is not only a film for fans, nerds, and action connoisseurs - but its a film meant to entertain. Period. An amazing way to kick off the summer season!

Written By Matt Reifschneider
Posted by DarkReif at 3:11 PM