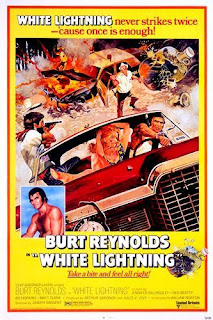 Having grown up with Burt Reynold's "Good 'ol Boy" comedies like Smokey and the Bandit and Cannonball Run it came as a surprise that White Lightning was done rather seriously. Reynolds still plays a "southern good 'ol boy" only this time he's in a gritty, early 70's revenge picture. I like 70's films and I like revenge pictures so hence that easy equation means I would like the film, and sure enough I did.

A mustache-less Reynolds is serving time in prison when he gets word that his brother has been killed by a corrupt Sherriff who takes in a percent of the illegal moonshine business in town. He strikes up a deal with the Feds to go undercover to take the sheriff down but it ends up being a much harder endeavor then he thought.

I have never been a huge fan of a majority Reynolds "good 'ol boy" comedies as that shtick can get real old real fast so it's always a pleasure to go back and visit films he made which are taken more seriously. He's actually a good actor if you can get him away from his by-the-numbers comedy efforts. Ned Beatty (re-united with Reynolds after Deliverance) is also good in his corrupt sheriff role but thanks to Deliverance, I always have a horrible picture in my mind when he comes on screen (people who have seen Deliverence know what I'm talking about).

White Lightning also gives the audience a plethora of well choreographed car chases and the film is full of edge of your seat chases through backwoods trails. Great stuff and no doubt this would influence Reynolds' later hit Smokey and the Bandit.

If I had to complain about an aspect it has to be the pacing and directing style (or lack thereof). The film does feel a little overlong for its subject matter (a little under 2 hours) and that could have easily been trimmed up with some nice editing. Joseph Sargent's direction is adequate but it only seems to get the job done. I never felt that the director was doing anything more than "point and shoot" and I would have loved some unique camera angles.

White Lightning is a very good example of a entertaining film before the well known "Good ol' Boy" comedy era of Burt Reynolds. It's ahead of the pack when it comes to southern 70's revenge pictures and audiences seemed to agree as three years later Reynolds would direct the sequel titled Gator.

Written by Eric Reifschneider
Posted by Cronosmantas at 9:31 PM