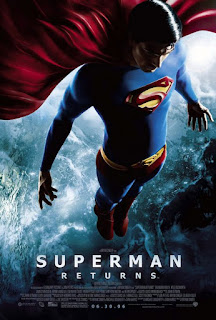 Twenty Years has passed since Superman IV and filmmakers were confident that the memory of Superman III, IV and Supergirl had faded so they thought it due time to make Superman V. Wait a minute, they can't call it Superman V as that would mean they would have to acknowledge the existence of III and IV and they don't want those memories coming back and filling people's heads, hence we get the more marketable and forgettable title Superman Returns. When news came out about Superman Returns, people were confused on whether this was a sequel to the original Christopher Reeve franchise or the start of a whole new series. When Batman Begins came out some people were under the impression it was actually a prequel to the 1989 Tim Burton film but SURPRISE it was the start of a whole new series. Hey, it gets confusing out there with sequels, reboots, remakes, and such so I can easily see why people didn't know. Superman Returns is the fifth entry into the original Superman series but it does throw a little wrench into the system. It completely ignores the events of III and IV and is a direct sequel I and II. If you're a fan of the franchise and didn't know that fact then you would also be extremely confused.

Thankfully the film's title sequence returns to the roots of the series by being larger than life and it's great to hear the old John Williams Superman theme again. After the amazing title sequence, the film's plot seems to pick up a few years after the events of Superman II with Clark Kent/Superman and Lois Lane moving up the corporate ladder at their newspaper job. However it seems that Clark Kent and Lane are a little at odds end because apparently they tried a serious relationship, which resulted in a child thus the relationship ended. Superman, having what seems to be a midlife crisis, goes back to his childhood farm to spend some time with his mother (this is where it's get confusing for people who don't know this film ignores the events of Superman III and IV as Superman's mother died in IV and thus he sold the farm). He finally finds his peace but his arch nemesis Lex Luthor (now played by Kevin Spacey) as gotten out of prison and he plans to make Superman's life a living hell by kidnapping his son and Louis Lane.

X-Men franchise creator/director Bryan Singer actually stepped down from the third X-Men movie to write and direct this film (perhaps a bad career choice) so we all know to expect a more seriously taken Superman film. Comic book based movies of today are taken far more seriously then their older counterparts. Being a fan of the original Superman movie the new tone shift was a little hard to get used to. I mean a film about a man that can fly and shoots lasers from his eyes is going to be serious and dramatic? I have a hard time taking this kind of material seriously but again I don't think the more cheesy approach like the first film would work today either.

The original two films boasted great special effects for the day and this is no different as the visual effects are stunning and it's much more believable today to make it look like a man can fly. The problem is we don't get interesting characters to match the visuals. Brandon Routh is our new Superman and to be honest he feels like a completely different person. Sure he looks like Christopher Reeve but his portrayal of the character is off by a long shot. Kate Bosworth as Louis Lane is also completely unmemorable and I miss the cockiness of Margot Kidder's original portrayal. Kevin Spacey, on the other hand, is an interesting replacement for Gene Hackman and thankfully he makes Lex Luthor the one interesting character to keep the film from collapsing under its own weight.

Is Superman Returns better than III and IV? Oh by far but it still feels like something's missing. First of all it's too confusing for audiences as they don't know what they're going into. People thinking that's a completely new Superman film and think it has nothing to do with nor have seen any of the original movies are going completely lost as unbeknown to them they are seeing a fifth part of a franchise. Fans of the franchise could also be lost as the plot ignores III and IV and to top it off, thanks to its serious, darker tone, the film also feels completely different than the original series and to be honest it doesn't even feel like a sequel thanks to its tone shift. It basically feels like a sequel disguising itself not to be one. As a result the film did poorly at the box office despite not being a horrible movie. To be honest the filmmakers would have been better off, oh I hate this term, "rebooting" the franchise as it has been far too long since the series originally came to an end so newer audiences don't remember them. But if they did that instead then I probably wouldn't be reviewing this film and that task would have been left up to my brother who gets first dibs on reviewing recent remake/reboots.

Bonus Rant: I hate how they changed the colors of Superman's outfit. The blue is darker and the red is more maroonish. Was this an attempt to show the films darker more serious tone by toning down the bright, vibrant colors? Perhaps but it still annoys me.