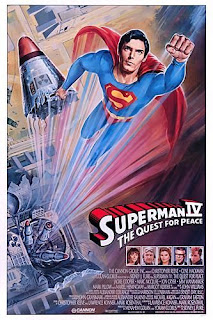 After the box office failures of both Superman III and Supergirl, producer Ilya Salkind said "TO HELL" with the franchise. Normally a franchise would just be dead, and every right the Superman franchise should be, but one little independent production studio decided to buy the franchise to continue the series. What production company would be dumb enough to spend bucco bucks on a dead franchise that would no doubt fail again at the box office? None other than my favorite production company Cannon Films. Cannon, a company notorious for making bad business decisions, even bought the franchise rights before they even secured Christopher Reeve in the role of Superman. Knowing they couldn't make another sequel without him, Reeve was basically able to demand anything he wanted. First of all he wanted to come up with the story and second Cannon had to finance his next film project (which ended up being Street Smart), not to mention the extremely high salary Cannon ended up having to agree to pay Reeve. With Reeve finally secured, Cannon forged on to make Superman: Episode IV - No Hope (sorry, I just had to make a Star Wars reference).

In the late 80's the cold war and threat of nuclear attack remained rather high so Reeve got the bright idea to come up with a plot to have Superman get rid of all the nuclear weapons in the world. Yes, the Superman series has degraded into making public service announcements. In his "quest for peace", his plans become foiled when his arc nemesis Lex Luthor (Gene Hackman returning also for a hefty paycheck) decides to make "Nuclear Man" out of DNA from a strand of Superman's hair.

Nuclear Man, oh hell, where to I begin with this guy. Originally Nuclear Man was supposed to be the evil clone of Superman also played by Christopher Reeve, which makes sense since he was crafted from Superman's DNA. Apparently Reeve wasn't too keen on this idea later because he fought an "evil" version of himself also in Superman III. So instead of even casting someone that somewhat looks life Reeve, they decide to cast some long flowing blond haired model. Hmmmm.... he came from Superman's DNA? BULLSHIT! Nuclear man also speaks in Gene Hackman's voice and even can grow long, razorblade finger nails (Freddy eat your heart out). Nuclear Man's weakness is that he can only function when light is present so we all know Superman is going to find some easy way to defeat him.

Some of the writing is so bad that many of the sequences are poor carbon copies of the original. An example is a scene where Reeve reveals, again, to Lois that he's Superman by forcing her off a building (why don't you give her a heart attack Superman!) and he then proceeds to fly her around to show off, just like in the first film... only shitty.

So the writing is bad and so is the Nuclear Man villain, what else could be bad? The special effects that's what! Cannon originally green lit Superman IV with a high budget but during filming, the company was going through some financial trouble so they decided to slash the budget and in that crunch the special effects got the brunt of the beating. With the lowered budget they couldn't afford to hire the same special effects house that did the previous films and had to go for a cheaper substitute and it shows. Even the opening credits (though better than Superman III) still pale in comparison to the first two films. The special effect of Superman flying at the camera is also recycled over and over again as they couldn't afford to shoot a new angle. You can even see cables carrying superman in many shots where in the first films they went to great lengths to hide them. That sequence I mentioned earlier with superman flying Lois Lane around, yea that sequence suffers too from the shitty effects and it's actually interesting to compare that sequence to the similar sequence in the original Superman as it is amazing how shitty effects can get in 10 years. Effects are supposed to get better, not worse!

It's always great to see Reeve as the Man of Steel and it's wonderful to have Hackman back but Cannon proves yet again they can't make a huge box office success by cutting drastic corners. Superman IV bombed so bad at the box office (like we all knew it would even before it was even made) that it proved one of the final nails in Cannon's coffin after the huge bombs of Lifeforce and Masters of the Universe. On a technical level Superman IV is a worse film than III but to be honest I enjoyed it more. It's more ridiculous but all that badness (that only Cannon is so wonderful at providing) made me actually enjoy it whereas III just annoyed me. Hey, at least it's better than the spin-off Supergirl! Though this entry was equivalent of running over an already dead horse, another sequel would be to come 20 years later with the 2006 release of Superman Returns.