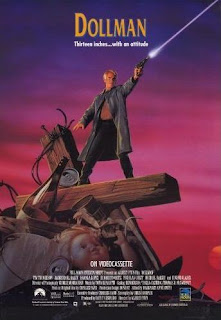 Producer Charles Band is sure good at coming up with really interesting ideas that sadly don't have a budget to properly back them up. Dollman falls into this category as the concept is really bad ass but the budget restrains the film from reaching its full potential. That however still doesn't strip it from becoming fun B-science fiction drivel!

Meet Brick Bardo (Tim Thomerson), a badass burnt out cop prone to violence on a far away world. He begins by saving a bunch of fat women in a laundry mat from a thug, gets fired by his superiors and then gets kidnapped by his arch nemesis who just happens to be a floating head (you see, Bardo blew away various body parts in previous encounters). He blows the hell out of the floating head's goons and then takes off chasing him in space ships. Both their ships hit some weird space disturbance and they are thrown across the galaxy where they land on Earth (the Bronx no less), a planet where Bardo only happens to be 13 inches tall! On Earth Bardo saves a struggling mother from some goons and our villainous head gets taken in by some sadistic thugs (lead by future Freddy Kueger actor Jackie Earle Haley). Now we can look forward to some serious bloodshed by these little guys!

The film is literally split in to two separate parts: Pre-Earth arrival and post-Earth arrival and to be honest the pre-Earth arrival is the best part... and he isn't even 13 inches tall yet! This sequence with Bardo on his home world is dark, atmospheric and loaded with machoism and violence. I had a ball! The film actually takes a little of a nose dive once he arrives on earth as the film just isn't as interesting from a visual aspect, despite the novelty of having our character being only 13 inches tall.

Director Albert Pyun is one of the best known directors for making schlock films. I either love or hate this guy as he can make some entertaining as hell B-movies or some that are downright unwatchable. Dollman thankfully is one of his better efforts. Hell I might go as far and say that Dollman might very well be his best film (though it would be a battle with "The Sword and the Sorcerer" and "Mean Guns" ). He actually does an adequate job here and loads the first part with a great dark atmosphere. Pyun impressed me with this release.

As for the cast how could you go wrong with casting Tim Thomerson as Dollman. Dollman really is the exact same character as Jack Deth from the Trancer series so that means he's a loveable asshole. Great one-liners and tough as hell. Jackie Earle Haley is also wonderful as our head goon. I always felt that he was an actor that never got the respect he deserved but thankfully audiences are coming around today with his wonderful portrayals in both Watchmen and the Nightmare on Elm Street remake.

Dollman is an extremely fun B-movie with enough extreme violence, kick ass one-liners, machoism, and a cool storyline to keep any B-movie lover entertained. Dollman is definitely one of the highlights out of Full Moon Entertainment's classic era. A sequel did follow in the cross-over film Dollman vs. the Demonic Toys but that film wouldn't come near the likability of this cult classic.

Written By Eric Reifschneider
Posted by Cronosmantas at 4:05 PM