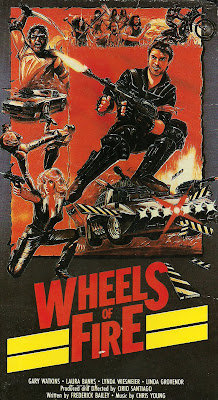 Back in a dark corners of second hand stores, right behind the DVD shelves, you will most likely find piles and piles of dust covered VHS tapes. And among all those tapes hidden between the dozens of copies of Mission: Impossible and Jurassic Park is sometimes hidden gems like Wheels of Fire. That's exactly how I landed a an ex-rental copy of seemingly forgotten Post Nuke flick. Finds like this makes me keep checking out second hands stores as I love finding old video tapes of bizarre and obscure films that have yet to make it to DVD. The tape I found of Wheels of Fire was so old that the glue on the title tag had disintegrated and thus fallen off the tape. The clerk even remarked that I must be one of those collectors of rare VHS tapes and even knocked the price down to a $1.00. A $1.00 for some forgotten 80's post nuke dreck was a perfect price to me!

Wheels of Fire was one of those dozens and dozens of post nuke flicks that filled the videos store shelves in the 80's and it is one of the dozen's that still hasn't made its way to DVD. The post nuke/road warrior rip-off genre was dominated by the Italians but it would only be matter of time before Filipino director Cirio H. Santiago would jump on that band wagon (the same way he copied the Italians with their Macaroni Combat releases which in turn copied American films). Still out of all the Road Warrior rip-offs I have seen, none is more of a rip-off than Wheels of Fire as our anti-hero looks just like Mad Max and he drives a vehicle shocking similar to Mad Max's famous interceptor. It looks so much like the Road Warrior that it really could take place in the same alternate Universe.

Our anti hero meets up with his sister and new boyfriend at a gladiator fight and in order to save her boyfriends life, he jumps into the fight to kill the opponent. This results in a high speed chase on a desolate highway. His sister ends up being captured by a ruthless gang that terrorizes the highways, and our anti-hero with the help of a warrior woman, a psychic, and a midget (what film isn't made better with a midget?) try to rescue her.

The film's look and presentation is exactly like The Road Warrior, only dumber. Wheel's of Fire really acts like Road Warrior's cousin that was dropped too many times on his head as a kid. The first thing that makes it dumber than the Road Warrior is that almost all the chase scenes have the film sped up to unconvincingly give the illusion that the cars are going faster. Road Warrior did utilize this technique a few times but not to this extent. Our characters also have talks and make love at VERY inopportune moments. Our hero and his sister fight about her boyfriend when the road gang and closing down on them fast. Get and your cars and get away damnit! His sister and boyfriend even take time to stop and make love when they damn well know the road gang is right on their tail. Let's just say the boyfriend finds out the hard way that he should have kept his hormones under control.

The film tries to distance itself from the Road Warrior by introducing a cannibal group of underground humanoids that resemble Morlocks from The Time Machine. It's an interesting section of the film that really comes out of left field. I also like how director Cirio H. Santioago utilized a unique World War II fort complete with huge canons as the gang's headquarters. He would utilize this location in what seems like every film he filmed in the 80's (including Eye of the Eagle and The Expendables).

Wheels of Fire knows it's a Road Warrior rip-off and doesn't try to hide it so I give it respect for that. It knows what it is and for a silly 80's post nuke flick I found it rather enjoyable and to be honest it was a lot better than I thought it was going to be. It is definitely the best film from cult director Cirio H. Santiago that I've seen, that's for sure.

Written By Eric Reifschneider
Posted by Cronosmantas at 7:55 PM