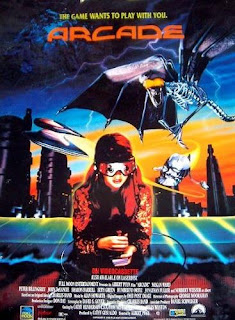 In the early 90's, movies incorporating 3-D virtual reality video games into their plot was a fad that thankfully didn't last too long. The most popular was the big budget dud The Lawnmower Man but on a much smaller scale there were such films as Evolver and of course Full Moon's Arcade. All I have to say is if 3-D effects are going to be the main attraction of your film, you better make sure they are good!

The script written future heavy weight Hollywood writer David S. Goyer is very simple. It's about a new Virtual Reality game that's getting a test run at a small arcade. After trying it out, a handful of teens are given a portable take home version, however the game's artificial intelligence grows and it ends up making some of the teens drool and then disappear. Two of our teens figure what's happening and decide to shut the game down at the source... by playing it.

The plot is insanely predicable and director Albert Pyun seems at odds directing a film that doesn't take place in a bleak future or include cyborgs. Overall the film felt very kiddish which is strange for Full Moon as they should have produced this under their family friendly sister company Moonbeam Entertainment. It just lacks in every department and it failed to deliver any of the cheesy Full Moon goodness I expect in their B-movie outings. No violence, no cool characters, no funny on-liners, and piss poor directing. To top it off the computer generated effects for the video game are insanely awful! I understand this came out in 1993 but these graphics even sucked back in those days.

It might just be me but it seems every movie about a virtual reality video game sucks and it still boggles my mind that Arcade is one of Full Moon's most popular films. It must be the nostalgia for viewers that saw the film as a kid because this is easily one of my least favorite's from the company out of their "classic" era of films. What's ironic is that I own 2, count 'em 2 copies of this turd on DVD. Why do I own 2? Well I got one in a box set entitled "Full Moon Classics Volume One" and another in a box set entitled "Full Moon Features: The Archive Collection." I can't sell one of them because that would ruin the box set... so there they sit, both of 'em, doomed to collect dust on my DVD shelf for the rest of my short life.

Written By Eric Reifschneider
Posted by Cronosmantas at 3:46 PM