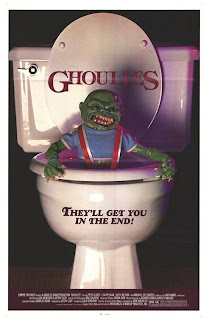 Sick of having distributors fuck up the release of his films, Charles Band decided to found Empire Pictures in order to produce and distribute his own movies. Two of the first pictures Empire Pictures made was Re-Animator and Ghoulies and both were huge hits for the company. Re-Animator I can see as that is a great horror film... but Ghoulies? After watching this Gremlin turd it's hard to imagine why it was such a huge hit. You want to know why Ghoulies was a huge hit? Because of the amazing add campaign created by Charles Band which had a ghoulie popping up out of a toilet. It's a great concept for a poster and after he came up with the poster artwork, he had the film crew go back and shoot a quick scene of a ghoulie coming out of a toilet. The add campaign worked making Ghoulies a success and terrifying thousands of kids in the process as they were afraid something in the toilet was going to bite their ass off. I admit the poster artwork made me scared of the toilet when I was a kid. It's hard to believe now...

So what we have here is young college couple moving into an old mansion that the boyfriend recently inherited. When digging through the basement, he finds old occult artifacts that belonged to his father, who we saw in the pre-credits sequence as a sadistic warlock. Tempted by the artifacts, he starts following in his father's footsteps and in the process raises some ghoulies from hell and freaking his girlfriend out in the process. Pretty soon his father is resurrected from the grave and it becomes a duel of the warlocks by the end.

The ghoulies are basically little demons about the size of a blender and to honest they don't do a whole lot in the movie. They are just there in the background as our main villain the warlock is our main focus. John Carl Buckluer's special effects are also rather lackluster and the ghoulies look pretty silly, more like they are plastic toys of ghoulies that were left outside and melted a little due to the sun.

The acting is there and the directing by wirter/director Luca Bercovici is adequate but the film fails to generate any suspense, scares or shocks. Perhaps if the ghoulies had more to do with the story and looked a little better but as is the film just comes out being too violent and too many adult themes for kids and it's too damn dopey for adults, a problem that can hinder a lot of Band productions.

Ghoulies is no doubt a cash-in on the success of Gremlins and it would be the first film to show-case producer Charles Band's obsession with little killer creatures that would eventually lead up to such films as Dolls, Puppet Master, Demonic Toys, Blood Dolls, Gingerdeadman, and would even inspire three sequels. Even with its badness there's still a charm about Ghoulies, a charm that makes me enjoy these early Empire Picture efforts even though most of them are bad. The Empire films definitely have a better look to them than Charles Band's later company Full Moon Entertainment. That look and lots of nostalgia keep me coming back, revisiting Empire films like Ghoulies from time to time even if it is nothing more than a Gremlin turd.

Written By Eric Reifschneider
Posted by Cronosmantas at 1:34 PM