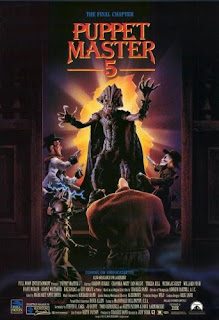 It can be difficult to write reviews on the second sequel of two that were filmed back to back as it is basically the same film just not quite as good. Though Puppet Master 5 is a lot like the fourth film, it still stands on it's own enough to make it worth reviewing. Like other back-to-back sequels, it comes out not as good as the entry before but not enough for me to dock the film any star rating.

Taking place right after the events of the last film, our computer genius and his girlfriend are being questioned by the police for the murders caused by the gremlin like Totems. While he is tied up with the legal system, his boss decides to get his hands on the puppets as their workings could revolutionize the world, and his pocket book. So he hires some goons that predicable get slashed by our puppets but our puppets soon come under attack by a new, stronger, meaner Totem so our puppet Blade must break their new master out of the police station to come to the rescue.

The plot surprisingly holds well on its own, a problem that usually affects back-to-back made sequels especially Full Moon ones. Trancers 4 & 5 and Subspecies II & III really feel like one movie split into two and thus each film lacks a proper beginning, middle and end. Puppet Master 5 does have some of these faults but not near as severe as the before mentioned films making it still understandable to watch some time after the last entry.

The production values, for a Full Moon production, are good and again comparable to Puppet Master 4. Returning director Jeff Burr again gives this film a slick look and our returning cast are acceptable. Then again with these films our cast isn't the important part and again the Puppets steal the show. The puppet Torch, who was absent in the last film, makes a quick appearance here coming out of nowhere and then disappearing almost as fast as he appeared. Don't toy with me like this Full Moon! Torch is my favorite puppet and he deserved to be in Puppet Master 4 & 5 and this cock teasing just pisses me off!

Since the film is so much like Puppet Master 4, the same problems arise and again my main beef is the still the alternate dimension lead by the demon lord Sutekh who still looks like a Power Rangers villain. I took my anger out on this aspect in the Puppet Master 4 review so I won't delve into it again.

Puppet Master 5 really marks the end of the classic Puppet Master era. It was the last entry made when Full Moon was still a strong direct-to-video company, it was the last Puppet Master film to be originally distributed by Paramount (the good years of Full Moon) and it was also the last film to feature the great stop motion effects by the late David Allan. It was even advertised to be "The Final Chapter" when original released but we all know Band couldn't let a cash grabbing franchise die and five, count 'em five, more sequels would get made and all but the most recent one don't come near the "goodness" of the first five entries and most are damn near unwatchable. Part 10 (Axis of Evil), which is the best sequel of the post-Paramount era of Puppet Master films, still lacks the magic that the original five had. Casual fans are recommended to stop here. Even though I'm a casual fan, I still found myself forging on suffering on for the sack of warning other potential viewers.

Puppet Master 5 Trailer
Posted by Cronosmantas at 10:41 AM