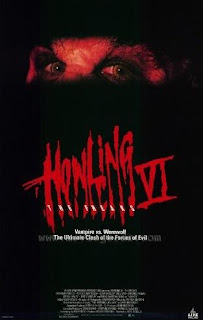 Long before the vampire lycanthrope battles of the Underworld trilogy and (shutter) the Twilight Saga (I just barfed in my mouth a bit typing that), there was a little direct-to-video sequel entitled Howling VI: The Freaks that pitted the blood sucker against the hairy flesh eater. Don't get your hopes up though as it isn't as monumental as you would think. Remember, this is a Howling sequel after all.

We get a drifter that wanders into a remote town in Southern California (no doubt because it's cheap to film there) and he ends up working for the local pastor fixing up a church and during which he falls in love with the pastor's daughter. Our drifter holds a terrible secret though and that is he grows teeth and hair when the moon his full. The owner of a traveling carnival gets word of this and decides to capture him in order to display him in his freakshow exhibit. Our pastor/daughter duo get wind of this and try to free their new friend but the carnival owner has his own secrete... he's a bloodsucking vampire!

The person that steals the show isn't the werewolf, but Bruce fucking Payne. I consider this guy one of the most underrated actors in the business. People today mostly know him as the villain in Passenger 57 but he was mostly regulated to low-budget genre films like Warlock III and of course Howling VI. It's almost sad to see him go away when his character turns into a vampire.

The budget restraints hurt this sequel like the previous two and thanks to Hope Perello's lackluster directing, it has a very direct-to-video feel about it where the last two direct-to-video sequels could have passed as theatrical material. The absolute worst aspect is the look of the werewolf. It looks more like bigfoot or a Neanderthal as opposed to a werewolf. He barely grows hair on his face let alone a wolf like snout. This very well might be the most piss poor looking werewolf I have ever seen (whoops, I forgot about the next entry). It's even a far cry from the werewolf designs in Howling II and III, and that's a sad statement.

Howling VI has a workable plot of vampire vs. werewolf but I wish it expanded more on that aspect. It just becomes another passable Howling sequel entry that is arguably better than most of the other sequels but thanks to boring directing and a shitty werewolf it just isn't as entertaining.

Written By Eric Reifschneider
Posted by Cronosmantas at 8:50 PM