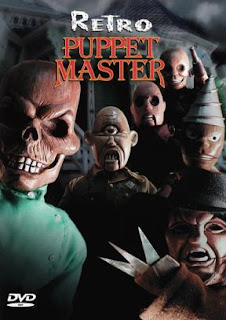 Still in need for money, Full Moon decided to unleash another dismal sequel into their Puppet Master franchise. What number do you think this is? No thanks to the title no one wouldn't know without a little research that this is the seventh entry. Also what is up with the title? Adding the word "retro" doesn't automatically make your film more "cool". To top it off the filmmakers decide to make the phrase "Puppet Master" one word again in the opening titles even though all the previous films, other than the first film, made it two words. Grrr...

Full Moon here decides to make another prequel in the franchise which oddly enough is a prequel to Puppet Master III which in turn was a prequel. So we have a prequel to a prequel? I think the universe just imploded from the very thought! The film opens with Guy Rolfe as Toulon talking to his puppets and reminiscing about the past so cue in the flashback music. So the rest of the film takes place while Toulon as a teenage and how he obtains the secret to reanimate puppets. However the people (or things) he stole it form aren't too keen on it so they send some cloaked people to get the secret back.

Since this is a "prequel to a prequel" (it hurts my head just saying that), our original "lovable" puppets are not in the majority of the movie so fans right away may be a little disappointed by this aspect. We instead get "retro" versions of them, which simply means early, more primitive wooden versions. Richard Band's original Puppet Master theme is also surprisingly absent which in turn may disappoint fans. I for one welcomed the new score as watching seven of these damn movies in a row made his catchy score grow old really fast.

The plot is just completely forgettable and to be honest I had a hard time staying awake for the damn thing. Every once in awhile a bad computer special effect (yes, Full Moon has started to find the power of bad computer generated special effects) would start to wake me up by totally pissing me off. Also the cloaked demon humanoids tailing Toulon and giving him hell remind me a lot of the cloaked Aliens from Dark City. It shouldn't surprise me though as it seems the Puppet Master franchise as resorted to ripping off better films. Typical there are a lot of continuity errors when comparing this to the other Puppet Master films but by this time I don't even care about that anymore.

Fans will no doubt feel totally disappointed with this sequel and all I have to say is SHAME ON YOU! Did you really expect this to be any good? I went into this film expecting shit and that's exactly what I got. Full Moon was making nothing but shit by this time so why should a Puppet Master sequel be any different? I will give them credit for trying to give us something different with this sequel it just a damn shame it was so poorly executed. It comes out being just as bad as Curse of the Puppet Master but at the same time it's a helluva lot more forgettable. I recommend skipping it.

Written By Eric Reifschneider
Posted by Cronosmantas at 11:04 AM