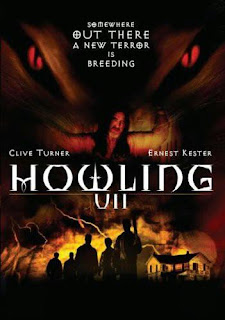 The Howling franchise will never win any awards as a great series. The sequels were lackluster and mostly bad but for the most part they were watchable, some even being guilty pleasures. That is of course until Howling VII (released in America as The Howling: New Moon Rising) infected video store shelves. Who knew the series could get so bad? Well it did and this home-made piece of crap not only pounded the final nail into the Howling franchise coffin, but it dug its grave and buried it under 10 feet of concrete. It's so fucking bad that Joe Dante suffered a minor heart attack while on vacation in Hawaii when the first video tape came off the factory belt. It's so bad that I even awarded it my second zero star rating, and by my scale 1 is the lowest you can go so you do the math.

We again get a drifter who rides his Harley into a small Southern California town (sounds familiar) when a few people start dying so he takes it upon himself to investigate and low and behold a shitty looking werewolf is to blame.

The main problem is that the plot takes it's sweet ass time to go nowhere. Most of the film is spent with our drifter drinking at the bar, talking to locals, and line dancing. Is this a howling sequel or an episode of Hee-Haw? We even get stock footage from Howling IV and V utilized as flashbacks to liven up the film. It's a sad day in the Howling world when you have to use footage of a shitty film like Howling IV to make your film better. How shitty does that make Howling VII? Words cannot describe and I will just say that Howling VII should take the place of Howard the Duck for use as a torture device in foreign countries.

What can I say about the acting...hmmm.....what acting! Almost the entire cast are actual real life locals in the small town and not surprisingly they can't act to save a shitty sequel from destroying an already feeble franchise. Don't even get me started on the werewolf effects! When the climax finally comes rolling and it is revealed who the werewolf is, a shitty computer morph is used to transfer that person into a god awful looking werewolf.

Who is to blame for this shit? That would be director/producer/writer/actor Clive Turner. He produced Howling IV and V and no doubt he needed some quick cash so he loaded up his home video camera, 500 bucks in cash and drove to a small Southern California town where he bribed the locals with beer to appear in his "blockbuster" film. What floors me is that New Line Cinema decided to pick up the film and distribute it. What the hell was Robert Shay thinking? Did he sign the contract to distribute it solely based on the fact that it was a Howling sequel and not even watch the film?

I have seen thousands of films and to this day Howling: New Moon Rising still ranks as one of the worst films I have ever seen. I sold my old VHS years ago and I don't miss it one bit and I could care less if it ever gets released on DVD. Keep in mind this is coming from a completist who has to own an entire franchise, including the shitty sequels.

Written By Eric Reifschneider
Posted by Cronosmantas at 9:00 PM