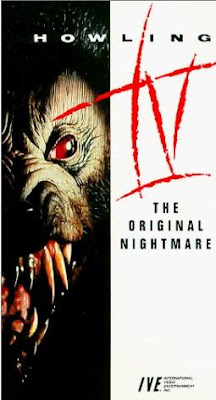 Apparently Joe Dante's classic original wasn't "good enough" so producer Clive Turner decided to essentially remake it, hence the lame subtitle "The Original Nightmare." Okay it does follow the book better (yes, I have read the Gary Brandner novel) but that doesn't prove it's any good!

Well Marie has a problem. Her problem is she keeps seeing images of this short creepy nun with bug eyes and every once-in-a-while she sees a werewolf head pop out and scare the holy shit out of her. Her psychologist recommends her boyfriend take her on a vacation so he rents a cabin deep in a remote area. Her craziness drives him nuts so he finds solace in the vagina of a local gypsy, who just happens to be a werewolf and of course she bites him thus he is a werewolf as well. Now Marie finds that her visions are reality so Marie with the aid of a friend have to destroy a town full of werewolves!

Not much I can praise this film about as it's pretty much all bad. Veteran director John Hough (Legend of Hell House) is on cruise control here and the acting for the most part is terrible. The special effects, other than a man melting into a gelatinous state, are also sub-par and I hated how the filmmakers here decided to go the cheap route and have our transformed werewolves being nothing more than trained dogs with glowing red eyes. WHAT?! The werewolves in the previous films were big creatures that walked up right and now their dogs running on all four? Sheesh...

Again it may follow the original book better but it didn't result in a better movie and there isn't anything really to recommend about this sequel other than a few unintentional laughs. Even the cheesy title song written and sung by Moody Blues member David Justin Hayward with lyrics like "something evil....something dangerous...." can't save this werewolf turd.

Written By Eric Reifschneider
Posted by Cronosmantas at 7:39 PM