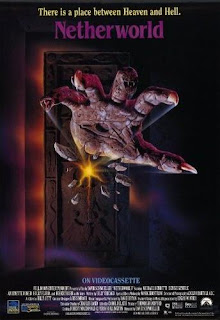 Netherworld is a good looking early Full Moon production that is set in the deep South. We get a thick gothic atmosphere in a setting full of lush vegetation, huge lonely manor mansions and strange brothels with ties to voodoo. Sounds like an interesting time to me. Sadly even with the films interesting setting it succumbs to a hokey script that has very little going on.

The film has a young man (Michael Bendetti, the guy that filled in for Johnny Depp after he left 21 Jump Street) inherit a huge southern manor after the father he never met dies. Arriving at the manor and meeting the two caretakers (a mother and daughter), he starts reading notes written to him by his father about how he hooked up with a voodoo priestess at the local brothel and how with his sons help, he can come back to the land of the living. Heeding the warnings of the mansion's caretakers, he heads to the brothel on multiple occasions to seek the truth about getting the father he never new back.

I have to give director David Schmoeller credit as even with a small budget, he gives the film a nice look. Schmoller is one of those directors that I always believed could have done much better as he has the talent but always had sub-par scripts to work with. Look at some of his other films like Puppet Master and Crawlspace and you can tell this guy has talent behind the camera, just not a good script book in his hands and that is the main problem with Netherworld.

The plot to this film moves at a snail's pace and it takes forever to get the story moving and it meanders to an unfulfilling climax. Our character goes to the brothel and back multiple times. Back and forth, back and forth with not much accomplished. In the basement of the brothel, weird visuals are abundant most notably a flying stone hand with snake heads on a few finger tips. This thing flies around a few times brutally killing a few people. The hand makes for an interesting visual but what purpose does it serve in the plot? NOTHING other than a cool visual. Nothing is ever explained about the hand and it only serves to be a cool aspect to throw into trailers and poster artwork to sucker people into seeing the damn film. The hand also rips off the flying silver spheres from Phantasm so the idea itself isn't even original.

Another problem is our characters, especially our secondary characters. At one point our caretaker of the house does a voodoo ritual but is blinded by our voodoo princess and thus disappears from the film completely. Why have her in the damn thing then? Her daughter is also pointless other than to serve as eye candy. Some characters are completely evil and then flip-flop becoming good at a split second with absolutely no explanation! There is also an interesting tie to the image of birds in the film but it is so poorly developed that it becomes more silly than anything.

For a Full Moon movie, this looks good and is by far one of their best looking films. With a better script this could have become a Full Moon classic but all the plot flaws makes the viewer come out more pissed off than entertained. It's a shame director David Schmoeller didn't go on to direct some decent films as he always seemed to be tied down with poor scripts provided by Charles Band. Netherworld actually marked the end of the directors long working relationship with the producer as they had a falling out. Considering the films Full Moon started churning out by the end of the decade, it was probably a good move on his part never to direct for Band again.

Written By Eric Reifschneider
Posted by Cronosmantas at 1:06 PM