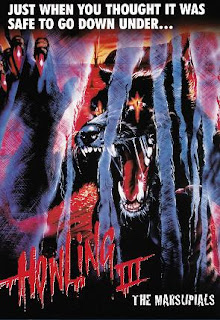 When Howling II was released in 1986, it left a whole crowd of horror movie buffs leaving the theaters cussing under their breath. Director Philippe Mora agreed with the fan backlash but he did not take fault for the werewolf excrement that dripped on the screen. Mora instead put the blame solely on the producers who "fucked up" his film by not giving him final cut or complete creative control. Upset that Howling II ended up not being the sequel that he envisioned, he decided buy the rights to Gary Bradners's novel "The Howling III", completely change the story around to take place in his native Australia and unleash a sequel that was completely his own. He proved that the vision was his as he is probably the only person on the planet that truly loves the film and proving at the same time that the producers of Howling II were NOT the only people responsible for it's shittiness.

So on with Howling III. Can you tell me what is Australia best known for? No not Vegemite, Marsupials of course. To make the film even more uniquely his own he decided to have the plot revolve around a group of.... MARSUPIAL WEREWOLVES! I have to hand it to him as he came up with a concept that will never manifest itself into another werewolf plotline.

We are introduced to a beautiful marsupial werewolf sick of her abusive pack leader, leave and go to the city where she is spotted by a young filmmaker who casts her in a film entitled "Shapeshifters Part 8" (Ironically the Howling sequels almost made it that far!). They of course fall in love but shit gets weird when a group of werewolf nuns (I can't believe I just typed that) comes to take her back. So her boyfriend and a college professor (who happens to have an old film of natives burning a werewolf at the stake) head out to rescue her. In the middle of this we get a crazy subplot of a Russian dancer, who also happens to be a werewolf, that travels to Australia to mate.

If Philippe Mora wanted to make the most bizarre werewolf film ever made then he succeeded as this movie is full of some crazy ass shit. Werewolf nuns, Skeletal Werewolf's, Russian Ballerina Werewolves but those aren't the most crazy aspects. The absolute weirdest sequence is when our little runaway werewolf gives birth what looks like a hairless rat which scuttles up into her pouch. It has to be one of the most "What the fuck" moments ever in a film. I've seen a lot of bizarre films in my time but that sequence is definitely in my top five "WTF" moments.

I do have to give Howling III a little praise though as it is the one Howling sequel that even comes remotely close to matching the sardonic humor in Joe Dante's original. Phillipe Mora however goes beyond subtleness with the humor making it ridiculous so most viewers will just find it, for lack of a better word, stupid. I do have to harp on the bad effects as the werewolves, like Howling II, look pathetic compared to Rob Bottin's grand looking lycanthropes in the original. Also what's with the PG-13 rating? Werewolf films, like The Howling franchise, are supposed to have violence and bloodshed worthy of an R rating. You won't find carnage like that here my friend.

Howling III is better than Howling II but Mora proves yet again he can't make a good sequel. It's definitely strange enough to keep fans of bizarre cinema entertained but the film does overstay it's welcome not to mention it's PG-13 rating making Howling III nothing to howl about. It still made enough money for more sequels to follow except all the sequels to come would be direct-to-video.

Written By Eric Reifschneider
Posted by Cronosmantas at 7:28 PM