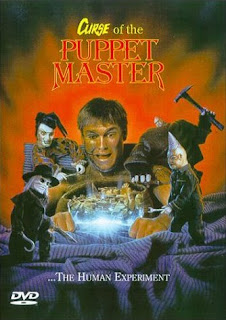 I believe Charles Band went home after work one day depressed about how his company Full Moon Entertainment was floundering. You see after their partnership with distributor Paramount Pictures fell through the company was on a slow decline that was starting to speed up. The dissolving of their partnership put an end to many of Band's movie plans including the planned Puppet Wars trilogy so he the company was in need of cash. He probably opened a beer, put up his feet and clicked on the TV only to see the 1973 film Sssssss playing on cable. This started turning the wheels in his head and he thought if instead of a man trying turn his daughter's love interest into a snake, what if it were a puppet? Bam he has a new idea to revive the now defunct Puppet Master franchise so the next day he met with his writers and banged up a script by lunch time. This is how I believe this miserable cash-grabbing sequel came to fruition.

As you can tell there are MANY problems with sixth entry into the Puppet Master franchise and the first is that the plot is a complete steal of Sssssss, even the ending! The only difference is instead of a snake, it's a puppet! The second problem is that the film is under budgeted so in turn many other problems spider web form this. Out of this spider webbing of problems, the first to hit you over the head is the use of stock footage from the previous Puppet Master films played off as new material. I can see low budget sequels using stock footage from previous films as padding in flashback form but to play it off as new material, that just a whole new low! Flashes of watching Deathstalker sequels came pouring into my mind! What even irks me more is that the stock footage from Puppet Master II even has those annoying wavy lines seen on the poor DVD transfer!

Another problem is continuity. Other entries in the series is guilty of poor continuity but not this very lazy extent. First the film brings back puppet characters that were CLEARLY destroyed in previous films without even an attempt at the lamest explanation. This is just an unacceptable and an insult to fans. Another problem that arises from the low budget is the effects. Gone are the wonderful David Allan stop motion sequences and all we are left with are stiff, poorly manipulated puppets.

To a lesser extent, another problem I have is the title. It just bugs me when franchises start to go all wonky with the title structures (Friday the 13th and Nightmare on Elm Street are just a few examples). The first entries were straight forward with numbers so why change it now? Was Full Moon embarrassed they made six films but then again only diehard fans would be interested in this film anyway. Again, not a huge problem but it still bugs me.

If I had to praise the film on one aspect it would be that Full Moon decided to have actual artwork made for the promotional material. Most of the video artwork for their films at the time looked like cheap Photoshop crap so it's nice to see they actually had nice artwork to match the previous entries. That's it! That's the only aspect I can praise this film on is the damn cover artwork.

Overall I just felt this was a cheap-jack entry made with no intention other than to squeeze some money out of the fans in order to keep the company afloat. They took the plot of an old horror movie, slapped in some stock footage and under the Puppet Master moniker and called it good. Though I hated the film this is surprisingly not the worst film in the franchise as a few more are unbelievably worse. To be honest I only own this film as it came in my Puppet Master box set, otherwise I would say the hell with it and sell it on eBay to another unsuspecting victim.

Puppet Master 6 (HA!) Trailer
Posted by Cronosmantas at 10:56 AM