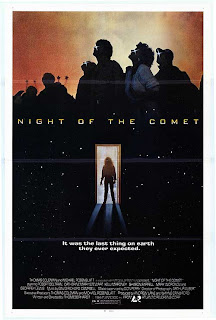 Apocalyptic comet, valley girls, zombies, machine guns, cheerleader outfits, shopping malls.... what does all this mean? A hell of a great time that's what! Night of the Comet is quite simply a great science fiction film that defines the 80's with its new wave look, big hair and PG-13 style violence. In other words if you want a blast from the past then Night of the Comet is your answer.

Apparently the comet that killed the dinosaurs is making its rounds and is about to pass by the Earth once again. The whole world is a party as they prep for the view but our valley girl sisters (the dreamy Catherine Mary Stewart and Kelli Maroney) either have to work or are grounded so they are unable view the once in a lifetime sight. When they awake the next morning, nothing seems to be left of anyone and in their place is a pile of red dust. The kicker is not everyone was killed by the comet as there are partially exposed zombies hunting for human flesh to eat. While blowing away zombies and shopping at expensive clothing stores, they meet up with Hector (Robert Beltran), a truck drive that also survived. Soon they meet up with some scientists who take them back to their underground bunker... but it's not dream answer they're expecting.

Night of the Comet is easily one of my favorite films from the 80's as it has a great concept mixed with the lovable 80's style. I mean where else can you find a girl in a cheerleader outfit shooting a sub machine gun at zombies with "girls just wanna have fun" blaring on the soundtrack? Nowhere but here buddy, that's for sure.

The cast is wonderful and when I saw this film as a kid it started a huge crush I had on Catherine Mary Stewart. She is just gorgeous and beautiful even to this day. Kelli Maroney is also cute as the somewhat dense cheerleader sister. I also liked the reunion of actors Robert Beltran and Mary Woronov from the film Eating Raoul. I would have never thought to see them in the same movie again and its wonderful to reunite them.

Since I was a kid I have always loved zombie movies and I liked the zombie aspect they brought into this picture. However it made me crave more. It's just a personal preference but I wanted to see more zombies as the few sequences featuring them were great (especially the zombie attack in the ally). What can I say other than I love zombies! I also liked the weird dream within a dream sequence that bares a little resemblance to the whacked out dreams in An American Werewolf in London.

So I have to ask: do you like science fiction? Do you like the 80's? Do you like zombies? Do you like beautiful women? If you answered yes to all of those then this film is for you. I loved it as a kid and I still love it to this day. Is it a perfect film? No but it's entertaining beyond belief and isn't that what films are supposed to be, entertaining? I say buy the damn thing already!

Written By Eric Reifschneider
Posted by Cronosmantas at 9:44 PM