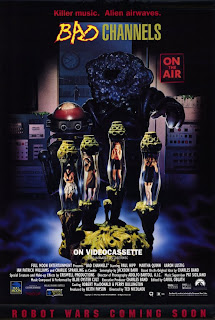 I have to admire the versatility of long time Charles Band collaborator Ted Nicolaou. This guy can direct dark, serious material like Subspecies and Vampire Journals and turn around and direct tongue-in-cheek sci fi comedies like TerrorVision and Bad Channels. I was a fan of the humorous TerrorVision (why that B-movie classic isn't on DVD I will never know!) so I went into Bad Channels open-minded. Though the result isn't as good as his earlier foray into the world of spoofy science fiction, it was still enjoyable enough as an early Full Moon Entertainment "classic."

Bad Channels is about an alien that comes to earth in order to shrink beautiful women to 13 inches tall, store them in bottles and take them home. Why does he want to do this? It never explains and spoofy sci fi film like this doesn't need to. Maybe he likes playing with live Barbie dolls. This alien with his little robot sidekick break into the newly started KDUL radio station in order to take it over and use the airwaves to narrow in and trap the beautiful women. Thankfully a controversial disc jockey and a bitchy news reporter are out trying to save the day.

It's nice to see a Full Moon film actually meant to be tongue-in-cheek as most of their output comes out being unintentionally funny (though I still enjoy them, from their classic era anyway). The appearance of our alien is quite hilarious with its huge bumpy helmet that looks like a turd with a port hole to see through. Some of the acting is bad but then again with a tongue-in-cheek film like this it just adds to the fun. Though has beens by this time, it's still cool to have rock legends Blue Oyster Cult doing the soundtrack. Blue Oyster Cult doing a film score, especially a low budget direct-to-video film? I never thought I would see the day.

I do have to complain as some of the film seems like Full Moon is desperately trying to self-promote heavy metal and hard rock bands they had signed to their record label Moonstone Records. Every time our alien is about to transport a girl, it seems to hypnotize her and she believes to be appearing in a music video and starts dancing with a band before being teleported. Why does this have to happen before she gets teleported? Again it never says and it just feels like shameless self promotion. These "music video" segments I like to call them are also boringly shot and the bands that are signed to Moonstone Records are not surprisingly not that good, except for a band called Sykotic Sinfoney and their quirky metal song Manic Depresso. Other than that it's pretty forgettable music mixed with lackluster "music video" shenanigans making these sequences tend to drag.

For a direct-to-video spoofy science fiction film, Bad Channels isn't that horrible. I had some fun with it even though there is little plot and it feels like it was written around to promote Full Moons record label Moonstone. It's definitely no TerrorVision but those better earlier Empire Film days will never be again. Make sure to stay tuned after the opening credits to see a cameo with Dollman (another Full Moon film). Actually a character in this film would return later into the Full Moon crossover Dollman vs. the Demonic Toys.