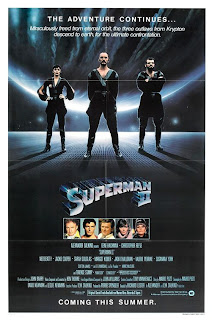 Superman II is regarded as one of the best sequels ever made. To be honest, it is, but Superman II should not be this good! First of all it's a sequel and sequels aren't usually supposed to be this good to begin with and second of all the film was plagued with production problems including the replacement of director Richard Donner (director of the original) with Richard Lester half way through the production. According to Director's guild, a director must direct over half of the film in order to obtain the directing credit so in turn Lester had to go back and re-film many of the scenes already shot by Donner. Again, how the hell did the film not turn out a disaster? Superman II proves that the man of steel is strong enough to keep the film together and the franchise strong... for now.

With Lex Luthor safely in prison, it was time to introduce a new villain. A villain strong enough to match superman's strength. How do they heighten the odds.... by introducing three of them! Our villains in this film actually made their first appearance in the beginning of the first Superman movie when they were being banished to the Phantom Zone. Here they break out of their flat, square prison (I don't feel like explaining so just make sure to watch the first film) and start making their way towards Earth. While on Earth they begin having fun with their heightened powers and start reeking havoc. Superman in the mean time reveals his true identity to Lois Lane and is too busy trying to score with her to take notice. Our villains eventually call out Superman and it becomes a special effects spectacle as they battle it out.

Knowing of the films rocky production before I watched the film, I came out flabbergasted as I couldn't tell the film had any production problems. Usually films with these type of productions suffer as the film will end up feeling rushed, or poorly edited or the feeling that two creative minds were at work. Not with Superman II and it feels a lot like the first film proving director Richard Lester was the right man for the job (at least for this sequel) for replacing Richard Donner.

Like the first film however there are plenty of dumb moments that tend to grate my nerves just a bit hurting my liking for the film. The part that does it in for me has to the "kiss of forgetfulness." After revealing his true nature to Lois Lane and then bedding her, in turn gaining her love, he then thinks it best that she doesn't know his true identify so he gives her a kiss that has the ability to make her forget. First off a kiss that makes people forget and second a kiss that only makes people forget a specific item in their memory just rubs me the wrong way. It's BULLSHIT! She remembers everything other than the fact that he is fucking Superman! Also if Superman has this uncanny ability to "kiss and forget", then why the hell doesn't he use it more often? Just like the rotating the earth backwards aspect, he should use this all the fucking time! Well maybe he does when he just wants to get lay Lois without all the emotional connection. He just reveals himself as Superman to her, lays her, kisses her to make her forget, and does it again the next week. Perhaps Lois Lane is Superman's "friend with benefits" and she doesn't even know it! Then again I digress.

Superman II may not be as good as the original but then again not many sequels are. It however comes close despite its rocky production and to be honest it's probably as good of a sequel to Superman as we could get. It still has all the same cheesiness and dumb moments of the original but at the same time being highly entertaining with it's silly charm.

A different version of the film got released in 2006 called Superman II - The Richard Donner Cut. Warner Bros went back and edited all the footage that Richard Donner shot with a handful of material Lester shot. I have not viewed that version so I cannot give my opinion but from what I have gathered from fans, it still isn't as good as Lester's edit. If I find it for a good price I will make sure and pick it up but I am hard pressed to believe it could be any better than this.