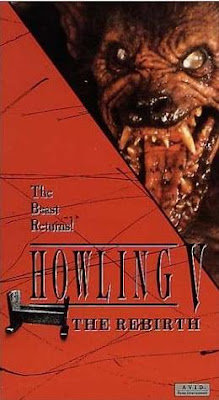 Another year, another Howling Sequel. Boy oh boy did they pump these sequels out fast in the late 80's as it was almost one a year. Thankfully though Howling V is a sharp improvement over that Original Nightmare crap and is actually, arguably of course, the best sequel in the entire franchise (though I do find Howling II to be a great guilty pleasure).

Howling V, like parts III and IV, is a complete standalone story with no connection to the previous films other than the aspect of having a werewolf factor into the plot. The filmmakers here decide to take the Agatha Christie "Ten Little Indians" approach as a group of what seems like randomly selected people are invited to stay in a secluded Romanian castle where it's inhabitants were slaughtered by a werewolf centuries earlier. Upon arriving they all become snowed in by a blizzard and start getting slaughtered one by one as one of the members is a lycanthrope.

What I like about this sequel is the fact it was actually shot in Romania and the location really adds to the atmosphere. The dark castle also gives a nice claustrophobic feeling aided by an odd electronic score composed by the curiously named group "The Factory". The collage of different characters also keeps the film just interesting enough to hold attention.

Typical with a Howling sequel there are far too many flaws keeping Howling V from being a really good movie. First of all is the acting as there are some really dreadful performances here. The film's budget constraints also show up with some unconvincing sets, exterior snow shots, and a lack of an onscreen werewolf. I'm all for the "less is more" aspect of not showing the monster a lot, but we only get one very quick glimpse of the beast. To top it off it looks really bad ass in the one shot! Howling III and IV had sub-par effects but they were happy to show them on screen all the time. Perhaps the budget was so low they couldn't create a convincing werewolf so they opted to hide it but I believe the audience deserves a better payoff then a quick one second glimpse at it.

Surprisingly Howling V isn't a horrible film as far as Howling sequels go. It's got some bad acting, a sometimes slow pace and a lack of an onscreen werewolf but it's atmosphere, quirky characters and bizarre score kept me interested.

Written By Eric Reifschneider
Posted by Cronosmantas at 7:51 PM