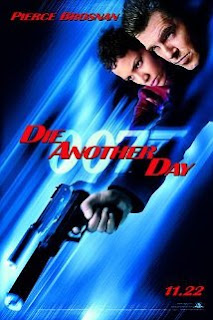 With "The World Is Not Enough", the James Bond franchise started to dip into that cheesy/over-the-top/goofy style once again and instead of recognizing that this might backlash, filmmakers pushed it even further for Pierce Brosnan's final Bond film, "Die Another Day". Despite the massive amounts of revenue that this film produced (hey, "Moonraker" made a lot of money too) this film falls completely flat in many ways and feels rushed, illogical, and rather absurd through most of its run time. Lending this film to be one of the worst of the franchise.

STORYLINE: Bond (Brosnan) finds himself being held hostage by some pissed off North Korean military types after he spoils an unknown black market deal, kills the military leader in charge, and does some significant damage with a hovercraft (yeah, you read that right). Someone leaked his cover though to the villains and after Bond is traded for another prisoner of war, he goes rogue (again) to uncover the dastardly betrayer of Her Majesty's secret service. This leads him to follow entrepreneur Gustav Graves as he unveils a new 'sun satellite' and begins to unravel a whole conspiracy about world domination (shocking!) that links to his capture.

PLOT 1/5: When you start off a film by having James Bond and two other completely pointless agents infiltrate North Korea by SURFING IN A STORM TO SHORE, than you know you are in for a ride of head slapping proportions. I don't mind my fair share of ridiculous Bond films, but this one might take the cake. The film, although claiming to homage other Bond films for its 40th franchise anniversary, is completely redundant of previous entries and never does a good job at making the homages meld very well. The entire satellite plot is ludicrous at best and moment after moment in the film just seems rather pointless. It does have some solid moments, his capture in North Korea was a cool idea that is completely brushed over, and there are even some interesting scenes that should have worked, the fencing duel between him and the villain, but rarely does. Its overabundance of CGI never helps either with the finale having poorly paced video game cut scenes. I do have to admit that "Die Another Day" has one of my favorite car chase scenes with Bond and the henchmen speeding alone ice, twirling and sliding, and eventually crashing into a melting ice palace. Its so over the top, but damn its fun.

BOND 2/5: Brosnan is now into full on Moore mode for "Die Another Day". Jacking up the ridiculousness and pure suave cheese to the max, Bond in this film never really strikes that coldness that Brosnan originally had when he started his time as 007. Even though the script has him TORTURED FOR A YEAR in the intro, we never really see the after effects of this in his character. We saw more hate and revenge in many other films like "Licence to Kill" or "You Only Live Twice" then we do in this one. For those of you out there that enjoy this side of Bond then rejoice as it takes full bloom here, whereas I will gladly skip on this serving. Brosnan still carries that swagger and charm, but it doesn't sell here.

VILLAIN 1/5: (Spoilers included) When we are introduced to our villain Colonel Moon (whom alters his appearance to Gustav Graves to cover his supposed death) as a man who stuffs his anger management teacher in a punching bag and beats him to near death, its obvious that "Die Another Day" is not interested in taking him seriously. It never does either. He becomes a smarmy jack ass that really never inspires fear (let alone in his Power Glove/Tron suit that controls his giant 'laser') nor surrounds himself with people that do either. He's a joke not a true match for the potential of James Bond. One of the worst villains in Bond franchise history.

BOND GIRL 1/5: With the hype of having Halle Berry as the Bond girl in this film, one would think she was going to blow away the competition. Turns out she does one of her worst performances for a 2D character (another spy who loved me? That hasn't been done before at all!) which has very little actual relevance to the plot in any meaningful way. She seems helpless half the time and seems to burden Bond rather than compliment him. Her chemistry with Brosnan is forced and when talks of her own spin off series (I would picketed that shit at the theaters) began, one could only wonder what humanity did to deserve this punishment. Turns out the spin off wouldn't take, but we were still punished with "Catwoman" about 2 years later.

"Die Another Day" does its best to be an entertaining send off for the rapidly aging Brosnan but fails to have anything beyond its ridiculous plot (a fucking invisible car? Even for Bond that's pushing it) and its gimmicks. Although it might entertain you for a minute or two, "Die Another Day" still smacks as one of the worst Bond films on record.

BONUS RANT: Madonna actually does a pretty fun theme for the movie with a rather cool title sequence (that incorporates story progress scenes - a first for Bond) but why the hell would you put her in the film? Even though its just a cameo, she's awful. And it blatantly takes you even further out of the film. *shakes head* One more detail that just makes "Die Another Day" even harder to watch.

Written By Matt Reifschneider
Posted by DarkReif at 10:33 AM