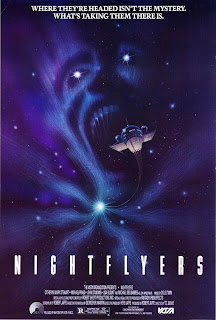 "Nightflyers" is another one of those 80's films that I always wanted to see just for the VHS/Poster artwork alone. After many many years I was finally able to view this seemingly lost film and it just proves how much better video artwork can be compared to the movie underneath it. Is "Nightflyers" a total waste? Absolutely not as it has a lot going for it plus it with it's interesting "Blade Runner" / 80's New Wave mish mash style and of course it also stars the gorgeous Catherine Mary Stewart. I feel in love with her when I was a kid after watching her in "Night of the Comet", "The Last Starfighter" and "Weekend at Bernie's". When the film does get to a bad stretch, it's always nice to forget about its flaws and just oogle at her beauty on screen.

"Nightflyers" is basically are more simplified, 80's new wave retelling of the last act of "2001: A Space Odyssey" without the intelligence. A group of scientists (lead by Catherine Mary Stewart) are sent out on a mission to track down an omnipotent alien life form cruising around the galaxy. While on their mission their computer goes haywire and starts killing off our crew when the ship's captain (bound to the ship by being ill and immobile, thus being the computers only friend) decides that he wants to leave.

As you can tell the plot is just a rehash of much better science fiction films. Our computer over sees our crew with a "red eye" in walls (hell Hal-2000!) and it opens pod bay doors to kill off crew and even locks crew members outside of the ship while they are in little pod like spaceships. Apparently the filmmakers can play the story off as new because they give the film a cool new wave 80's look to it.

I will give the film credit as a has a great look to it. I found the Blade Runner look and lighting mixed with 80's new wave hair, outfits and camera shots rather interesting. The look of the film did keep my attention when the plot failed to interest me. I really dug the shot at the beginning of the film with Catherine Mary Stewart's narration and it how it shows her with awesome mirrored sunglasses which reflect the rest of the crew. It's almost straight out of an 80's music video.

The cast is also good with decent acting helping the flawed plot along. I also really liked Catherine Mary Stewart's character as she was smart, courageous, beautiful and a good human being all at the same time. Actually I think this film hardened my crush on Catherin even more!

If Lionsgate ever decides to release this flawed science fiction film on DVD I would actually buy it even though I wasn't whole heartedly impressed with it. I dug the dark 80's style and the cast was great. Plus I am guaranteed to buy anything starring Catherine Mary Stewart, one of the most gorgeous actresses of the 80's if you ask my humble opinion.

Nightflyers Fan Made Trailer
Posted by Cronosmantas at 12:51 PM