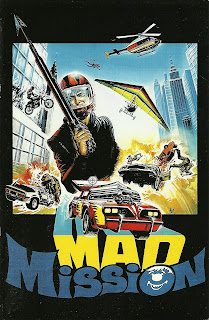 Mad Mission is the beginning of a series of films from Hong Kong that I am amazed isn't more popular with Asian cinema lovers here in a America. The series is better known as Aces Go Places in the rest of the world and this film was so popular in Asia that it inspired four sequels. The reason is due to the wonderful combination of action, espionage, comedy and wild stunts that highly resembles early 80's Jackie Chan movies. Those Jackie Chan movies are popular here in America but not Mad Mission? It's not that Asian cinema lovers don't like them, it's because that they haven't heard of them or if they have, they just haven't seen them as they are quite hard to locate especially since the Anchor Bay box set of the first four films has been out-of-print for years. I hope to help change that.

The film opens with a wild diamond robbery where notorious thief "King Kong" crashes through a high-rise window and escapes with diamonds while on a motorcycle. A bald cop from America is teamed up with a hard ass Hong Kong women to crack the case but later on they must team up with King Kong to find the diamonds as his partner has been killed and the crime lords that he stole the diamonds from and are closing down him fast. Lots of funny hijinx and amazing stunts ensue.

People that have seen this film usually first talk about the amazing stunts and this film is loaded to the brim with them! It seems like the entire film is one big stunt. I was disappointed in some of the stunts as there are a few that look a little too staged but that didn't hurt the entertainment value. Beyond the stunts though I have to say the film is perfectly cast. Cantonese pop star Samuel Hui plays King Kong and he really looks like a taller Jackie Chan with a smaller schnozz and like Chan he does some pretty good stunt work. Karl Maka and Sylvia Chan are also wonderful in their cop roles.

The characters are all likeable and funny and the characters are what I truly love about these films (though the stunts do help). Their playful banter and bickering can be really humorous. Some of the humor can be a little too slap stick at moments but it doesn't go overboard. Another aspect I love is the incredible catchy score which features a guitar similarly structured to the famous Monty Norman James Bond theme mixed with whistling. Speaking of James Bond, these films really seem inspired by that franchise with their structure and amazing stunts. The James Bond influence would only increase with sequels to come.

I can't express how much fun I had with this film. Hong Kong comedies can sometimes grate my nerves but Mad Mission balances out the action and comedy perfectly making for a truly entertaining experience. If you're a fan of action comedies and Asian cinema then you have to hunt these Mad Mission films down! Again there are five in the series and a spin-off called Aces Go Places '97 (which really has nothing to do with the initial run). Only the first four films in the series have been released on DVD in the United States and like I mentioned they can be a little hard to hunt down since the box set has been out of print for a while. The set is well worth the effort!

Written By Eric Reifschneider
Posted by Cronosmantas at 9:21 PM