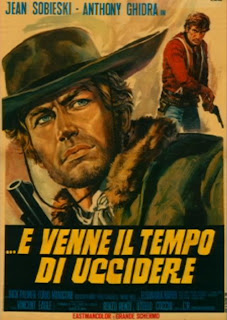 Joe... what a blah name for a Spaghetti western anti-hero. Sure Clint Eastwood's character in Fistful of Dollars was nicknamed Joe but that was because no one knew his name so they gave him a simple one. In a genre littered with interesting and peculiar names like Django, Mannaja, Sabata, Sartana and Cjamango, Joe just sticks out like a sore thumb. Sadly Anthony Ghidra's character is just about as blah as his simplistic name.

A newly appointed deputy arrives to his new town only to find chaos. In the midst of all the unlawfulness, he finds the towns sheriff, aptly nicknamed Tequila Joe, drunk off his ass at the local bar. Apparently two rival gangs in town (one Mexican, one American) are at each other's throats and kill anyone or anything that gets in their way. Instead of dealing with the situation, Joe turns a blind eye and disappears in the bottle. His new deputy won't have anything to do with these law breakin' gangs so he nuts up and in turn tries his hardest to get Joe to do the same. Predictably he's hard to convince at first but eventually comes around by the time the by-the-numbers climax kicks in.

Nothing against Anthoney Ghidra but I never saw the appeal of him in westerns. He only did about 5 or so yet he is a popular name in the genre. I've seen 4 of the westerns he made and he has yet to impress me. The filmmakers attempt to make his character sympathetic but the poor writing doesn't make the audience feel for his character. Instead of a tragic figure he just comes off as a pussy and I for one don't watch spaghetti westerns to follow "pussy" characters.

Tequila Joe does have a lot of qualities Spaghetti Western fans will like especially the catchy score and nasty villains. I also respect the filmmakers trying something new with the main character by attempting to make him "sympathetic" but thanks to bad writing it doesn't come across. This is another film for only the most diehard fans of the genre. Released on DVD from Wild East as a double feature with A Hole Between the Eyes.

Written By Eric Reifschneider
Posted by Cronosmantas at 9:25 PM