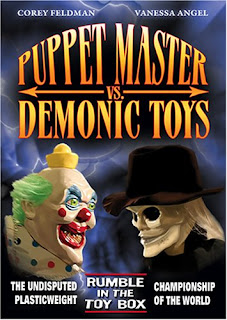 This is a film that should have been in Full Moon's classic era of B-movies (circa 1989 - 1994). Puppet Master and Demonic Toys were two of their most popular films and it would have been killer to see a proper crossover film made featuring both sets of evil toys. They made Dollman vs. the Demonic Toys instead and perhaps the shitty-ness of that film made them stray away from this film concept. B-movie fanatics dream of a Puppet Master and Demonic Toys crossover film finally got made in 2004 but don't get your hopes up folks as Full Moon didn't even make the damn thing. The biggest crossover event (okay I may be exaggerating a bit here) in horror since Freddy vs. Jason and Full Moon wasn't even involved! Yes apparently Full Moon was desperately in need for cash (when aren't they?) so they licensed out their copyrights for the material in order for, cough cough, sci fi channel to make it. NO NO NO! Not they sci fi channel! You know a franchise has hit its ultimate low and entered the ninth level of hell when it gets resorted to sci fi channel dreck! You want to hear some worse news? It stars Corey Feldman! THE HORROR, THE HORROR!

Feldman plays André Toulon's great grandson Robert Toulon and he and his wife obtained the notorious puppets at a Paris flea market (what are the chances a Toulon relative would happen across these?). Recently divorced, he and his daughter decide to reanimate them. Unbeknown to them they are being spied on by an evil toy corporation whose owner has made a deal with the devil so with the help of our Demonic Toys, she tries to get Toulon's secrets.

Even without Full Moon or Charles Bands involvement, it still was written and directed by Full Moon regulars C. Courtney Joyner and Ted Nicolaou proving the film, if Full Moon was directly involved, could have worked. Sadly with Sci Fi Channels involvement, the film comes out horrid perhaps even more than the last two FULL length Puppet Master films (I don't even want to think about Puppet Master: The Legacy).

Thanks to being made for TV, all of our typical puppet and toy mayhem and violence gets toned down to be TV friendly. So basically we get none of the fun nature of either franchise. In Demonic Toys, Baby Oopsy was known for being fowl mouth but thanks to TV limitations all we get is him saying "bitch" a lot lame sayings like "I have a job for her in my diaper." Juvenile crap.

Director Ted Nicolaou and the heads at Sci Fi also decided to make the film comical which was probably the safe approach to get viewers. However I feel this goes against both established franchises. Though they can be unintentionally funny, every Puppet Master film was taken seriously. Sure Demonic Toys contained black comedy but it also had a streak of seriousness. Not here and it basically makes a mockery of both franchises as it goes for a comedic approach.

Another aspect that will no doubt irk fans is that since Full Moon had nothing to do with this cross-over, the puppets and toys are not the original props used in the original film series. They instead are cheap, poorly made replicas and to add insult to injury, the puppets become all cyborg when Feldman fixes them up with terminator style arms and shit (Six Shooter even has laser guns) after they get damaged in a fire.

This is an insulting joke of an attempt to make a cross-over film of both series. It's so bad that even Charles Band doesn't consider this part of the official canon of either franchise despite it being the ninth entry in the Puppet Master series and the third film to feature the Demonic Toy characters. Yes it sucks but why not include it when you still consider Puppet Master: The Legacy part of the canon when it was basically a compilation of stock footage? If you weren't going to consider it part of the canon then you shouldn't have given the rights to sci fi channel to make it. Just take the money and run and pretend it didn't happen? BULLSHIT! It sucks but it STILL COUNTS! I would like to pretend that such films as Jason Goes to Hell and Howling: New Moon Rising don't exist but they do and it's just better to accept it. Count it and just ignore the plot elements in sequels to come. Other franchises do! As it is I believe even the most forgiving Full Moon fans will hate this. I did that's for sure but to be honest it's no worse than a lot of material Full Moon was pumping out at the time.

Written By Eric Reifschneider
Posted by Cronosmantas at 9:54 AM