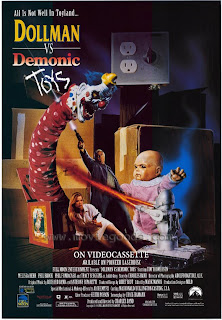 After the end credits to Full Moon's Bad Channels, we were given a sequence of Dollman walking to Pahoota (the town in Bad Channels) to hook up with Bunny, a girl shrunk down to 13 inches by an alien. After that short sequence, the screen promised further adventures of Dollman but no-one knew it would be a crossover film which would include three different film series! Yes, Dollman vs. the Demonic toys isn't just a sequel to Dollman and Demonic Toys, but Bad Channels as well! This sounds like it would be a fantastic time but I got my hopes up and this crossover came out being a cheap cash-in that barely runs over an hour long.

Well like in the post end credits sequence in Bad Channels, Dollman arrives in Pahoota to hook up with shrunken Nurse Ginger. Right away there is a BLARRING continuity error. At the end of Bad Channels, the girl Bunny was the one left 13 inches tall and nurse Ginger was grown back to normal size. WHOOPS!!! My guess is that the actress refused to return so Full Moon "conveniently" rewrote the script to have Nurse Ginger still being 13 inches tall hoping viewers would just forget that little fact. WRONG! Well Dollman and Ginger hook up, shag, and then are approached by a cop (Tracy Scoogins, returning from Demonic Toys) to have them help here destroy some toys from hell. Always in the mood for action, Dollman agrees so he and his girlfriend go out on a hunt. The result isn't near as fun as it could have been.

This film feels like it was cooked up in a matter of minutes and to top it off, only about half of it (a half hour out of its measly hour long running time) is new footage. The remaining film is all flashback footage from Dollman, Demonic Toys and Bad Channels. WHAT! Full Moon you cheap cocks! I've already seen those movies so I don't need to rewatch them!

The film feels considerably cheaper than all three films it's a sequel to and the part that takes a beating is the special effects as when Dollman battles the Demonic Toys, it's obviously guys in suits making the toys run around. I did dig the new demonic toy which is a G.I. Joe like solder with bug eyes. He really gave Dollman a run for his money.

The film does have a few moments (the line "pop goes the weasel" is one of them) but it's not enough to save this rushed, clobbered together film. It could have been a monumental project for Full Moon but as usual Charles Band decides to cut corners resulting in a film that's a disappointment to the hard core fans. Sadly this film killed any chance of further adventures of Dollman but the Demonic Toys would return in another crossover film (Puppet Master vs. Demonic Toys) and a direct sequel (Demonic Toys 2).

Written By Eric Reifschneider
Posted by Cronosmantas at 4:19 PM