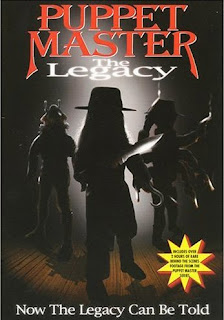 Well I found the film, the film to give my one and only zero star rating to. Why Puppet Master: The Legacy you ask. Well it's for the simple reason that this barely fits the definition for a movie as only about a half hour is newly shot material. The rest is all stock footage from previous Puppet Master films utilized as flashbacks. This constitutes it to be the eighth entry into the Puppet Master franchise? This is no more a sequel then a damn "best of" compilation! I apologize in advance because as I write this review, I'm going to start losing my temper and it is going come out in vulgar and colorful words.

The plot (what plot?) of the new 1/2 hour of footage has a girl trying to destroy the dolls until she comes in contact with Eric Weiss. Who's this? Well apparently this is the boy from Puppet Master III that helped Toulon. Well Weiss decides to have a sit down with the girl and tell the story of the puppets and cue in stock footage from all previous seven Puppet Master films sloppy edited together in flashback fashion.

Even with only a half hour of new footage, Full Moon couldn't even get the continuity right! This little footage is a sequel to Puppet Master III but a prequel to the rest of the series, so why the hell does Weiss talk about the events of those films when they haven't even happened yet. Some might argue that it takes place after the events of those films then again how the hell did he get his hands on the puppets. The continuity in this series is so fucking pathetic.

I didn't think the franchise could sink any lower but at least the previous two shitty sequels were new stories. A compilation of stock footage is the shits and all I have to say to Full Moon is FUCK YOU! Actually I'm giving the finger to the wrong company as Full Moon at the time of this release had changed their name to Shadow Entertainment. So FUCK YOU SHADOW ENTERTAINMENT! How dare you rape your fans with this shit! You might as well stick a gun to their heads and demand their money. I can't believe I spent money to watch this shit. If anyone from Full Moon is reading then they should have the decency to send me a free copy of the new film Puppet Master: Axis of Evil for fooling me into actually spending money on this crude. Charlie Sheen is known to give people money for wasting it on seeing him in Men at Work so shouldn't Full Moon compensate fans for wasting money on this? They actually also owe me a pair of batteries because I wore some out in my DVD remote for fast forwarding through the stock footage. If I want to watch that footage, I will just go back and watch the other films!

What's ironic is that Full Moon actually considers this as part of the Puppet Master franchise but not the next entry Puppet Master vs. Demonic Toys, which Full Moon sold the rights to Sci Fi channel to make. This compilation shit counts but a film that is actually a full movie doesn't? Again, Full Moon, FUCK YOU! I still have a love and nostalgia for your early films but this is unforgivable! This even ranks below the likes of Subspecies 4 and Trancers 6, which at least had the decency of being entirely new films. Puppet Master: The Legacy belongs in a special place in hell with the likes of films like Howling: New Moon Rising. What a minute, did I limit myself to only one zero star rating? I just might have to change that...

Written By Eric Reifschneider
Posted by Cronosmantas at 11:15 AM