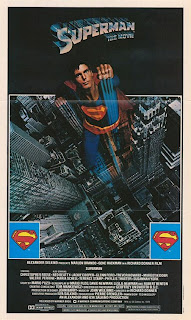 In the late 70's, a light-hearted adventure film captured the imagination of the film going public by going against the dark nature of all gritty films that filled the theaters prior. The film became a sensation and soured to becoming one of the biggest money makers of the decade. No not STAR WARS, Superman fool!

Based on the DC comic book series of the same name, producer Ilya Salkind and director Richard Donner teamed together to bring us an extremely large scale production. They even included a cast as large as it's extremely high budget. I'm talking about Marlon Brando, Gene Hackman, Ned Beatty, Margot Kidder and of course the late Christopher Reeve as the "man of steel."

For those not familiar with the story of Superman, here's a quick recap as told in the film. Superman's home world Krypton is about to be destroyed so his parents send their baby across the galaxy where he lands on Earth. On earth his abilities are super human and he can fly, move faster than sound, etc. He is found by a farming couple and raised to manhood. When an adult, he gets a job with his alter ego Clark Kent at the Daily Planet newspaper where he falls in love with his co-worker Lois Lane (Margot Kider). Every day he finds time to change into Superman in order to save people from their doom. All goes swell until super smart criminal genius Lex Luthor (Hackman) and his bumbling side kick Otis (Beatty) decide to make some money by threatening the world with some stolen nuclear missiles. Now it's up to Superman to save the day without revealing his true identity to his secret love, Lois Lane.

Everything about this production is grand and the opening title sequence and the wonderful score by John Williams shows you right away that you're in for something really special. The production values, the cast and the direction are all tops! The special effects for the time were as good as they could get and kids could really believe a man could fly. The film does have a long running time but there is a lot of back story to the character that needs to be told so I never felt the film was too long and director Richard Donner kept the pace moving well.

The film however is very cheesy, perhaps too cheesy for modern audiences. It rides that fine line between "light-hearted adventure" and "silly" but it works making for a damn entertaining film. If the film was made today it would no doubt be done seriously, perhaps too seriously like a majority of comic book based movies today. Hell, the recent fifth entry in series Superman Returns took the serious approach and was a box office bomb proving that approach might not work either.

The film however does have plenty of dumb moments that can grade on my nerves sometimes, even though I try to be very forgiving with the film. First of all Christopher Reeve's portrayal of Superman's alter ego Clark Kent. Though he is perfectly cast as Superman, his portrayal of Clark Kent is a little too dimwitted and klutzy for my taste. Yes I understand he's trying to make sure people don't make the connection between him and Superman but COME ON! That "dumb" aspect of the Kent part of his personality could have been played down a bit. There is also a sequence towards the end of the film where Superman looses a loved one so he flies around the worlds so fast, changing the rotation in order to turn back time. First of all changing the Earth's rotation will not turn back time and second, if it's that easy to prevent an event, why wouldn't he change the earth's rotation more often. These are just a few of my gripes with some insanely dumb moments.

Superman (or known sometimes as Superman: The Movie) is well made, extremely fun film that is hindered by numerous dumb and dimwitted moments. If it weren't for these moments I might have given the film 4 1/2 stars but they did bug me enough to knock it down half a star. Many people that are fans of today's dark, seriously taken comic book adaptions will no doubt find this cheesy, perhaps too cheesy, and dated to truly love. I find those aspects part of its charm. What's even more odd is I have never been a fan of the comic book character of Superman as he seemed too "superhuman." He is so powerful that I had a hard time believing anyone could actually be a threat to him. Even without being a fan of the character, the film still won me over and people at the time were also won over by its lovable charm as four sequels and a spin-off would come in the years to follow. Sadly most of those follow-ups would lose the charm.