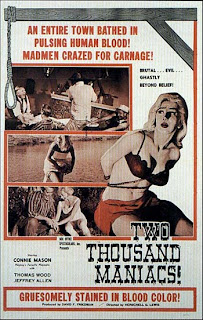 THE SOUTH WILL RISE AGAIN chimes in the lyrics to the opening southern banjo tune so it comes as no surprise that Herschell Gordon Lewis's second entry into his distributor dubbed and unconnected "Blood Trilogy" (also including Blood Feast and Color Me Blood Red) has Lewis show the bloody horrors of the south in a somewhat silly and shocking fashion.

After the opening, catchy jingle, we are shown some southern boys in overalls putting shoddy made detour signs in the highway detouring six people into the town of Pleasant Valley where they are having a huge centennial celebration? They townsfolk treat the newcomers with joy and admiration at first and invite them to stay for free for the celebration. Unbeknown to them the celebration is for the rising of the south since their embarrassing takeover of the Yankees and they plan to murder our guests in all sorts of gruesome fashions.

Gruesome deaths is Herschell Gordon's Lewis's specialty as he shocked the world with his gore film Blood Feast the year before by showing blood and gore never before thought perceivable. He proves here again why he's the "godfather of gore" (of the 60's at least) as he pulls no punches by hitting the audience in the face with gruesome and grisly deaths. I'm talking about arm ax cutting, drawn and quartering, nail barrel rolling and rock crushing. Compared to some of today's graphic horror films this might seem a little 'tame' but for the time there was nothing more bloody and shocking than this.

Typical with Lewis's productions, the film is EXTREMELY low budget so it does have very low production values. Thankfully no sets were needed as it was filmed in and on real southern locations and Lewis makes the most of what's available to him. The sound is affected the most by the low budget is the sound as it is staticy and somewhat muffled. The acting for a low budget gore flick is actually decent and Herschell does manage to load the film up with extremely attractive women to off balance the horrific gore effects.

Compared to Lewis's previous film Blood Feast, Two Thousand Maniacs definitely is less over-the-top and campy and taken a little more seriously. Lewis also takes a supernatural slant in this film in the third act which I personally feel goes against the tone of the first two acts. Some people might actually like the supernatural slant but I felt it was out of place. I also felt the film lacked a true protagonist and all 2000 members of the town are really represented as one entity. The towns mayor could have easily been better written to give the 2000 maniacs a single face and a villain for the audience to focus on.

Two Thousand Maniacs proved to be another success for Lewis and he continued to make gore drenched low budget films but none could quite match this. Most of his other films were gore without much horror or plot but he still is able to craft a little suspense here making this a true cult classic. This film did teach me to be weary of anyone who flies a confederate flag. They just might be one of the 2000 maniacs waiting patiently for a special centennial so the south can rise again!

Written By Eric Reifschneider
Posted by Cronosmantas at 2:03 PM